The Cheesecake Incident in Williamsburg, Virginia

During the 1973-74 school year, I was a Visiting Professor at the University of North Carolina Law School in Chapel Hill, N.C., moving there for that period with my wife Charleyne and our son, Clayton, who had turned one year old that December.  For spring break in March of 1974, we arranged to meet Jay and Polly Westbrook, my old friends from law school, and their son Joel, who was slightly older than Clayton, for a vacation in Williamsburg, Virginia.


When we were all gathered together down there, we took rooms at a motel, and proceeded to do touristy things in Williamsburg, wheeling the children around in strollers, looking at the recreation of colonial times in his historic city.  (Coincidentally, I graduated from York High School in 1961, not far from Williamsburg, so I'd been here before, and, indeed, had taken my college entrance exam at the College of William and Mary).  Happily, Jay and Polly had brought along a portable bar, so after a day of sightseeing, we'd return to the hotel, put the children to bed, and then have a drink or two to end the day, while regaling ourselves with stories from law school, some of which might actually have been true.

On the final night we made reservations for dinner at the Williamsburg Inn, a very elegant upscale establishment, hiring a babysitter for the boys.  Of course we downed a drink before leaving the motel, and on arriving at the Inn were told there would be a wait before our table was ready in the restaurant.  In no hurry, we repaired to the bar and had another.  When we were seated not long thereafter, Jay, always the connoisseur, ordered two bottles of wine, one red and one white, and we sipped those throughout our splendid dinner.  The atmosphere in the dining room was cultured (there was a string quartet playing in one corner) and comfortable.

In those days, when I was just 30 years old, I was something of a practiced drinker, but Charleyne was not.  She rarely drank at all, and usually had only one drink when she had any.  But this evening she entered into the spirit and "spirits" of the occasion, and was in a very merry mood by the time dessert was offered to us.  I should also mention two other things: Charleyne is a talented mimic (her imitations of various faculty members at the law school were dead-on perfect), and in Clayton's toddler days the Whaley family watched a lot of the children's TV show "Sesame Street."  On the dessert menu was a favorite of Charleyne's: cheesecake.  Unable to bottle up her delight, she jumped into an imitation of the Cookie Monster's famous deep-voiced "COOKIE!" exclamation, but changed it to


"CHEESECAKE!!!"
and said it far too loudly.  The string quartet momentarily stumbled in the execution of the piece they were performing, and all around the room diners' heads popped up in alarm.  After the briefest pause the normal sounds of the room returned, and we happily finished our meal.  It was suggested that we repair again to the bar for an after-dinner drink, and of course we did that.  I excused myself and went downstairs to the men's room. 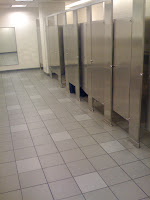 As I was sitting in one of the stalls, I suddenly recollected the "cheesecake" incident , and (I'd had quite a bit to drink myself, remember) that caused me to laugh out loud.  The other three stalls were occupied, and a room that had already been quiet, suddenly was even more ominously still as those present wondered who this nut was.  That, alas, struck me as even funnier, and I went into a fit of laughter that built on itself as it occurred.


When I finally achieved control, I realized that none of the other men had left the bathroom.  Two were still in stalls and one was washing his hands, but obviously they wanted to wait and actually see this lunatic who'd been laughing like a hyena.  I was too embarrassed to come out until they were gone, so I stayed hidden, and this waiting game took forever.  After about fifteen more minutes they gave up and left, and which point I could do the same.


I'd been gone quite awhile, but somehow Polly, Jay, and Charleyne, all three having a good time of their own in the bar, hadn't missed me.  To this day "CHEESECAKE!" has been an inside joke between Charleyne and myself, being muttered in that Cookie Monster voice at the strangest moments. 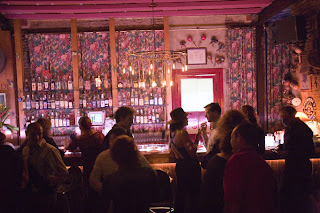