In a previous post ("How To Change Gay People into Straight People," see Related Posts below) I discussed the disgraceful history of the Ex-Gay movement and so-called "reparative therapy," both of which pretend to be able to cure homosexuality, but which are in fact flagrant frauds.  As a lawyer, I'm amazed these people aren't put out of business by simple lawsuits alleging fraud and/or malpractice.  When asked for a list of people who have successfully converted from gay to straight, these organizations or individuals suddenly go mum and refuse to cooperate.  As I've also mentioned before ("How I Lost a Gay Marriage Debate") I have a standing offer of $5000 to be donated to the charity of choice of the offeree who can produce five men who used to be gay but by the efforts of whatever organization or process can now be tested and found to be totally heterosexual.  After decades of the Ex-Gay movement and the steady efforts of many reparative therapy psychologists you'd think there would be thousands of men who would so qualify, but so far not a single effort has been made to collect my $5000.  The reason is clear: you can't change gay people into straight people, and these efforts always fail.  Always.


In my gay rights activist days (the 1980/90s) I was frequently on radio call-in shows where the callers would claim that they used to be gay but now were straight.  The law professor in me, who loves to conduct Socratic dialogues to get at the truth, would go to work.  "You used to be gay, but now you're married and having sex only with your wife?"  "Yes."  "And you never have homosexual thoughts—and before you answer this question, be aware that if you lie even slightly about this, you will deceive hundreds of men in your position who are desperate to change and depend on you to say, if it's true, that you never ever even slightly think about gay sex."  Long pause.  "Well, yes, I guess I still think about it sometimes."  "And sometimes masturbate thinking those thoughts?"  Another pause.  "Sometimes."  "If it's still that important to your pleasure, how do you satisfy yourself with your wife?"  At this point one of the callers confessed, "I pretend she's a man."
In debates about homosexuality through the years, whether in public forums or living rooms, when someone says that they don't like homosexuals I ask them, "What would you do if you were a homosexual?"  "I wouldn't be a homosexual," is the usual response.  "How would you avoid it if you discovered that in spite of your upbringing, in spite of your religion, in spite of your strongest desire to change, you were a homosexual like it or not?"  "I'd get help from my pastor or a doctor."  When told this supposed help doesn't work (with offers of books and websites to prove it), the person I'm talking to changes the subject.  I just have to be wrong.  I just have to be.  The bible commands that I be wrong.  Surely religion or medicine or something has the magic pill that can be taken twice a day until heterosexuality occurs.  Surely.  Because if I'm right and change isn't possible, then whoever I'm talking to has to rethink his/her position, and most people would rather slaughter hogs than do that.
The best that the Ex-Gay movement or reparative therapists can offer is for gay people to learn to suffer in silence about one's homosexuality, while leading a life of sexual depravation and frustration ("offer it up to God as your burden").  The Catholic Church sponsors an organization for gay Catholics called "Courage"  (Supreme Court Justice Antonin Scalia's son Paul, an ordained Catholic priest, is one of its mainstays), which teaches that Catholics can be homosexuals and good members in standing of the Church if they never act on their homosexual orientation (they just pray and hope that abstinence works—hence the "courage" part of the title). 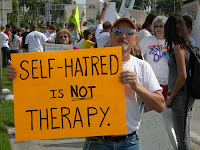 Very upset by the hypocrisy and outright cruelty of all this, I once went to a meeting for the parents of homosexuals who were anxious to see their children change and become heterosexuals.  The group sponsoring the meeting was an offshoot of Focus on the Family, and was trying to get a new chapter of that organization started in Columbus, Ohio—this was in the late 1980s or early 90s (I'm unclear when).  The Columbus Dispatch announced that the meeting would help parents deal with homosexual children, that a pastor from Dayton would lead the discussion, and that the gathering would be held on a coming weekday evening at the MCI Cafeteria on Morse Road.  I decided to go, but I needed a "wife" for the occasion.  Naturally I called Lorraine Latek, who through the years in Columbus has morphed into my chosen sister (her husband Arthur is on the Ohio State law faculty with me), explained the situation, and asked if she would pretend with me that we were the distraught parents of a homosexual child seeking guidance.  Always one for an adventure, Lorri agreed immediately.

She did have one reservation.  Lorri is dedicated foodie and a tremendous cook, proud of her epicurean tastes in food, and as we exited from my car in the parking lot to enter the MCI Cafeteria, she hurried me along.  "I can't be seen going into an MCI by my friends," she insisted.  "It would ruin me."  Completely understanding, I hustled into the building with her, our faces averted.


In the meeting room there were only about twenty people, some of them middle-aged couples, with the rest being two ministers and young people.  A clipboard was passed around as a sign-up sheet, and Lorri filled it in with our fake names and address.  A very nice minister from Dayton, Ohio, led the program.  He described his mission as bringing gays to God.  To do this he frequently went to public places and on spotting suspected homosexuals, he would begin to talk to them about the need for religion in their lives.  This minister then introduced us all to a young couple about to be married, both of whom he'd converted from gay identities to complete heterosexuality.    The young man was tall, but very effeminate, and his bride-to-be was about as butch as lesbians get.  Lorri and I exchanged glances, secretly agreeing that a wedding gift for these potential newlyweds would be a waste of money. 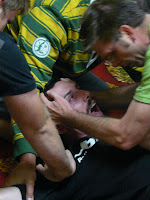 Lorri and I had rehearsed a cover story in case we were asked to describe our reason for coming (teenage son who had recently come out to us), but we never had to say a thing.  The only really interesting moment was when the other minister, older and stern-looking, who had said nothing until the meeting was winding down, suddenly exploded with, "But you've said nothing about casting out the demons who are causing all of this!!!"  The room went strangely silent, with deep embarrassment battling confusion throughout the crowd.  Lorri and I, for fear of a laughing fit, worked hard at not catching each other's eye.  In answer to the outburst, the younger minister from Dayton kindly replied something like "Of course, we need to explore all possible remedies."  With that the gathering was over.


I signed up "Arnold Whaley," my parakeet, for the mailing list of this organization (so I could keep an eye on them).  But they didn't last long, disbanding within a few months in spite of increasingly dire pleas for both money and attendance.


In the end homophobia, even in the name of God, is so sad: the wasted time, energy, anguish, and sorrow, all unnecessary suffering.  The young people the minister from Dayton prayed over either eventually escaped and lived the lives they were always meant to live, or else they endured decades of desperation (or, the worst outcome, committed suicide rather than face a God or parents they could not please).  But not one of them became a happy heterosexual.  This is doubly tragic because it was avoidable from day one.  The cure for their problem was easily available: admit to themselves what was always true (their sexual orientation) and then figure out how to achieve the best life possible with the cards they were dealt.