I had a fear of heights for the first thirty years of my life, but it faded in time.  Strangely, I only had it when I was connected to the ground, say leaning out a high window or at the edge of a cliff.  When I was a passenger in a plane, I had no problems with looking down to the ground, not even when the plane was landing and we were almost touching the runway.  However, eventually this phobia, a common one, faded, and heights don't much bother me (though a character in a movie who's in danger of falling puts me on the edge of my seat).

I developed gephyrophobia when I met the Chesapeake Bay Bridge in 1981, crossing it on my way to a vacation in Atlantic City.  The bridge is enormous, both in height (186 feet) and length (four miles).  Look at the pictures and consider this additional terror: the part of the bridge that you drive on is not solid, but is instead a metal grid you can see through right down to the water far below you—emphasizing the distance your automobile will have to fall before it splats into the gigantic Chesapeake Bay. 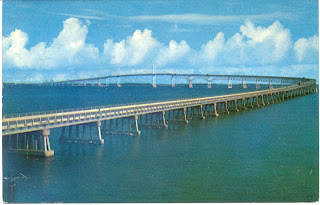 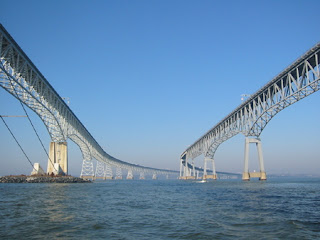 My panic attack started as my car began to climb up and up and up, while the water swirled by an increasing distance below.  My breath came in gasps and sweat broke out on my brow.  None of this affected my driving, and I'm certain that a video from a distance of my car trip across the bridge would be uninteresting.  But anyone in the car with me would have certainly noticed my manic condition (and then considered leaping from the vehicle).  I'm told that my reaction is not uncommon, and—private enterprise to the rescue—for a $25.00 fee  helpful contractors will drive you across the bridge in your own car.


After this experience I became afraid of driving over any large bridge ("gephyrophobia" is the technical term).  Fortunately this didn't come up much until the following year.  The University of California Hastings Law School in San Francisco offered me a Visiting Professorship for the 1982-83 school year, which I accepted.  I decided to drive to SF from Columbus, Ohio, where I normally teach at The Ohio State University Law School, and for the purpose of the trip out I first drove to Indianapolis, where my ex-wife Charleyne lives and practices law, and picked up my then nine-year-old son, Clayton, so he could accompany me on the trip.


"What a great father and son adventure!" my friends commented on learning of these plans, to which I laughed and replied, "Yes, until the car breaks down in Nebraska."
And it was a great trip except for two things: (1) our car did break down in North Platte, Nebraska (though it was easily fixed and we were soon on our way), and (2) I had to deal with a goodly number of large bridge crossings.  The first of these was the mighty Mississippi, which was the obstacle separating Illinois from Iowa.  Clayton, happily playing with his Star Wars figures, was completely unaware of my distress as we started over the bridge, and I manfully chatted with him as if nothing were wrong.  Inwardly I was a mess, but Clayton noticed nothing and we crossed this bridge and all the others without any visible problems with old Doug.

For the trip I pretended to make Clayton the navigator, and he struggled with maps every morning (with me helping him reach the right results).  I wanted him to get an idea of how very large our country is, and the five days we took to get to California did imprint this message on his consciousness.  As a child I was an Air Force brat, and my family had done much driving across most of the United States (though only once a trip this long—when my mother drove my sister and me from Indiana to Seattle to board a ship to Japan in 1954).  The first part of Clayton and my journey was across the Great Plains (not particularly interesting driving), and then we hit the Rockies (which can be too interesting to drive through with large trucks behind you as you traverse highways that have mountain on one side and steep drop on the other), and that beautiful descent into Salt Lake City through the Wasatch Mountains.  Clayton enjoyed the trip, though getting him to look up from his toys and be as astounded as I was at some of the views was not always possible (he was, after all, nine).  Other than the all day layover in North Platte, the trip was uneventful, and we were both glad we'd made it together. 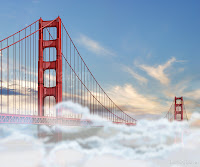 But now that I was in San Francisco I was living in a city surrounded by large bridges.  Indeed, as I've mentioned in a prior post (see "With Tim in San Francisco 1982/1983" below), from one window in my apartment I could look out and see the Golden Gate bridge.  Clayton and I had had to drive across the Oakland Bay Bridge to get into the city, and I was destined to cross both of these bridges a lot during the next year.  That would have been a nightmare except for one thing that happily occurred.  I was sitting one day reading a magazine article about phobias (see the list of the most common phobias at the end of this post), and was amazed when the author casually commented that any phobia is mild type of "mental illness."  MENTAL ILLNESS!  I put down the magazine in a huff.  I would not—simply would not—have a mental illness.  So I firmly decided that from now on I would not be afraid of crossing bridges, nor think anything about it.


Perhaps you won't believe it, but this worked.  My gephyrophobia disappeared instantly and has not returned.  All right, readers, I know that getting over a phobia is not usually as simple as making up your mind to do so, but in my case that was truly all that was necessary.  But when I was thinking about this post it occurred to me that maybe I never really had gephyrophobia at all.  The reality could be that only the enormous Chesapeake Bay Bridge brought on such a panic attack, which I then wrongly extended it to all bridges until the magazine article made me rethink the matter.


Hmm.  It would be interesting to see if I could now drive across the Chesapeake Bay Bridge without it being a big deal.  My guess is that I could do it, but—trust me on this—I'm never going to find out.  If my travel plans take me in that direction, I'll somehow find an alternate route that doesn't have me driving up into the clouds and looking down at water 186 feet below my tires.