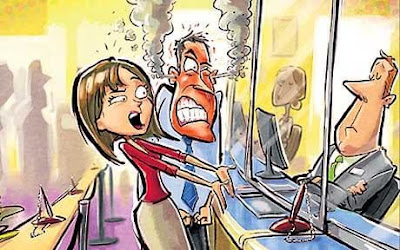 Yes, readers, it’s happened again.  Yesterday the Republicans, by a 51-50 vote in the Senate (Vice President Pence cast the tie-breaking vote) and by an overwhelming majority in the House, have forbidden consumers to exercise their usual right to go to court when banks engage in outrageous practices.  Our President is sure to sign the law when it reaches his desk; http://www.politico.com/story/2017/10/24/consumer-protection-arbitration-senate-pence-244140. 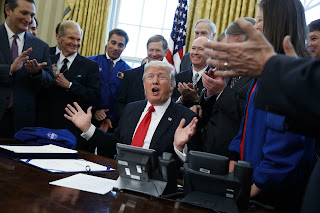 Banks love this.  Now when the banks come up with new ways to screw customers, the customers will remain screwed, with no legal redress of any kind.  Perhaps state attorneys general will take action against the banks (ho, ho, ho, given that most states have Republican administrations that are very bank-oriented) or perhaps state and federal bank regulators will do so (another ho, ho, ho, since in a Trumpian world Republicans are mostly in charge of those entities too). 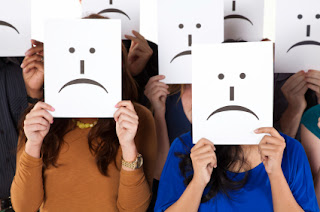 Let me give you an example of the sort of evil banks do that should upset you.

Say you have $1000 in your bank account and this month you have made ten transactions out of the account: nine debit withdrawals of $30 each ($270 total) and then, on the last day of the month a check for $1000, thus overdrawing the account, though the bank pays it anyway. The agreed-upon fee for any overdraft of the account is $50 per transaction. You’d think this would mean that the bank would hit you with one $50 overdraft fee, right?  Ah, no.  Most banks engage in a practice of paying “high to low,” meaning that when posting items against the balance they pay the largest one first (the big check) and then create supposed overdrafts with all the little ones. Thus the bank charges you with $450 in overdraft fees for nine transactions that supposedly overdrew the account.  Banks love this sort of math because the amount they make annually from overdraft fees is huge.  Their overdraft profit in 2016 is now estimated at $15 billion---that’s right, billion; see http://money.cnn.com/2017/08/04/pf/overdraft-fees-cfpb/index.html!

Outraged at this amount, you complain to the bank that both common sense and decency mandate you shouldn’t have to pay more than $50 for your one mistake, but the bank points to a clause in the fine print of the agreement you signed with them that allows them to pay overdrafts “high to low” in computing overdraft fees.  You say that this is just wrong and the banks are taking unconscionable advantage of their customers by this sneaky trick.  You threaten a class action lawsuit against the bank of behalf of all their customers injured by the practice, but the bank chuckles and points out another clause in the contract that forbids group lawsuits completely.  What?  Oh, yes.  There’s a clause stating that in the event of any dispute with the bank the consumer will not sue in the courts (no judge, no jury) but will instead resort to mandatory arbitration.  In such a procedure an arbitrator, appointed from a panel of arbitrators and selected by the bank, hears the arguments of both parties (you and the bank) and then decides the matter.  The loser typically pays the fees of the winner (though many banks waive this requirement when consumers bring the arbitration).  Hmm.  Well, it’s not worth hiring a lawyer and arbitrating over $450—it would likely cost you much more than that in attorneys fees, which are not recoverable in the arbitration even if you win.  Oh, but wait!  You could bring a class action arbitration and that way recover a huge amount, making it worthwhile.  “No, no, no,” the bank replies, pointing to the contract which clearly forbids class action arbitration.  You can only arbitrate your particular dispute. 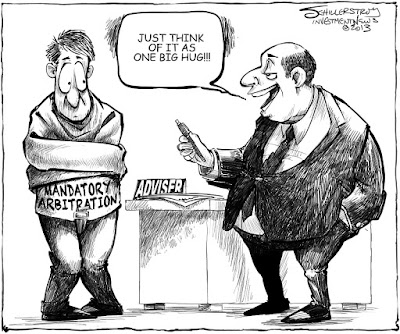 So what do you do?  Well, you can bitch, you can scream at the unfairness of it all, but in the end you will pay the $450.  The banks chuckle and don’t mention that there are a lot of other unfair clauses in their contract with you, all of them are protected by the mandatory arbitration clause that forbids both going to a real court and also blocks class actions of any kind.

One other thing: studies show that if an arbitrator rules in favor of consumers in a mandatory arbitration, he/she is unlikely to be selected as an arbitrator in future disputes. 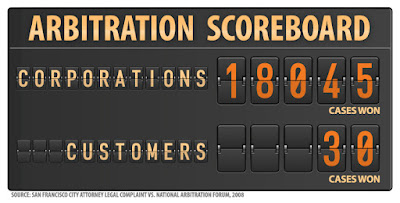 During the early days of the Obama administration, then Harvard Professor Elizabeth Warren (an old friend of mine, by the by—see http://douglaswhaley.blogspot.com/2010/05/elena-kagan-and-me.html­­­­) proposed the creation of what became the Consumer Financial Protection Bureau (CFPB), which would have power to protect consumers from misbehavior by financial institutions by passing regulations and bringing enforcement actions.  Since the creation of the CFPB it has returned over $11.9 billion to 29+ million consumers and stopped many outrageous practices.  Most recently it passed a rule that would forbid the use of mandatory arbitration clauses like the one described above.  This summer The New York Times printed an opinion column written by the director of the CFPB, Richard Cordray, saying that the bureau “found that group lawsuits get more money back to more people.  In five years of group lawsuits, we tallied an average of $220 million paid to 6.8 million consumers per year.  Yet in arbitration cases we studied, on average 16 people per year recovered less than $100,000 total.”

Bankers howled at the new CFPB rule forbidding mandatory arbitration clauses.  It would force the banks to defend many lawsuits and spend lots of money, they argued.  Lawyers will get rich, but the poor banks will have to pass their losses on to their customers!

Congress to the rescue.  The new law overturns the CFPB rule and restores the status quo.  Banks can still put whatever clauses they like in bank contracts and if consumers sign them, well, ignorance has its price, right?  That might be fair if almost all banks didn’t present uniformly ugly contracts to their customers, contracts filled with unconscionable clause after unconscionable clause, all phrased in language the consumer will likely neither read nor understand if noticed.  Someone once said it’s like sticking your head into the lion’s mouth and hoping it’s a friendly lion. 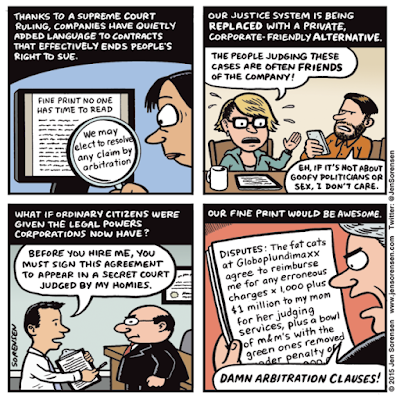 The argument that forbidding class actions only enriches lawyers and will impoverish the banks is also wrong.  As Cordray stated above, consumers get big money from these suits.  It’s true that the lawyers also get paid, but the lawyers earned that pay.  If the they lose the class action lawsuit they get nothing and have wasted a lot of time and money.  If banks want to avoid losing such suits or, better yet, not have them filed at all, their remedy is simple: cut the crap out the contracts and play fair with their customers.  Customers only win lawsuits when the banks have done something outrageous.  Stop doing outrageous things and the problem solves itself.

Ah, well, happily for the banks they needn’t change their contracts at all.  What Congress has done is to encourage even more shenanigans hidden in fine print (Elizabeth Warren calls it “mice print”).  With mandatory arbitration clauses still in force, the sky’s still the limit!  By the way, every time you go on the internet and buy something and click on an “I Agree” icon, the “Terms” you have just agreed to will almost always have a mandatory arbitration clause hidden somewhere in there. 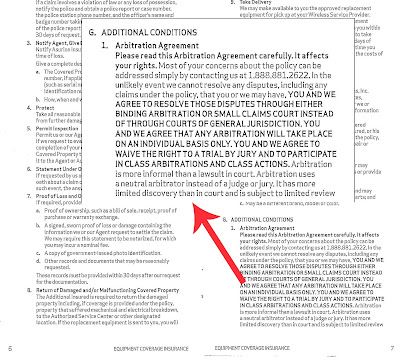 Oh, one other thing!  The Republicans (from Trump down to almost every one of them in both houses of Congress) are in favor of eliminating the Consumer Financial Protection Bureau or at least drastically cutting back its abilities to do anything meaningful.

Watch for it!  That’s the next step in this ugly saga. 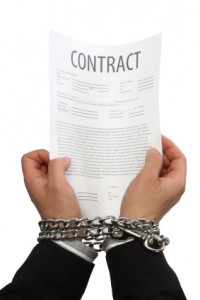 [Addendum:  On November 1, 2017, President Trump, as predicted, signed the bill overturning the CFPB's rule forbidding mandatory arbitration, to the delight of the chiefs of the Consumer Bankers Association (CBA), Independent Community Bankers of America (ICBA), National Association of Federally-Insured Credit Unions and several other groups attending the signing.  Richard Hunt, CBA president and CEO, said the arbitration rule “was about protecting trial lawyers and their wallets,” praising Trump and Congress for ensuring “consumers have the necessary tools to receive relief without going through drawn-out class action proceedings.”]

“How To Write an Effective Legal Threat Letter,” October 19, 2011; http://douglaswhaley.blogspot.com/2011/10/how-to-write-effective-legal-threat.html