Robert Whaley, my father was in the Air Force so we moved a lot when I was young.  In the summer of 1954 he was transferred to Yokota Air Force Base in Japan, where we would live for three years without returning to the States.  I turned 11 that September and was 13 when we returned in 1957, and it was an interesting immersion in a completely different world.  All of us change dramatically as we morph into teenagers, and for me it was like coming to life in Japan and not quite knowing who or what I was.  The United States seemed a mythical land which I only vaguely remembered, and appeared to be some sort of paradise for kids my age.  At the base PX I would buy, say, a Superman comic book and see advertised in it all sorts of similar comic books that were not for sale at that PX.  Did American kids really have the ability to go into a drug store in the U.S.A. and walk up to a display of all these comic books, readily available for purchase?  Wow! 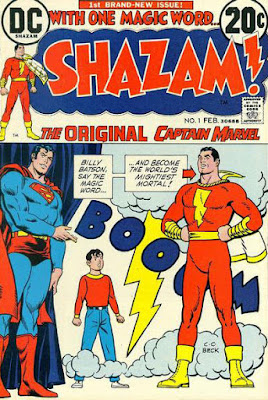 When we did return to America I remember my sister Mary Beth (two years younger) and I wandering around downtown Seattle with our eyes wide at the riches so casually on display for ordinary people.  In Japan we hadn’t even had television—just movies and radio rebroadcasts of popular shows of the day.

For my parents Japan was a game changer too.  Both of them were athletic—indeed Dad had flirted with the possibility of a professional baseball career earlier in his life as a catcher, but threw his arm out when exploring that world.  He was a pretty good golfer too, but my mother, Lenore Whaley, was not a serious golfer until we moved to Japan.  There she learned that a young Japanese maid would come in Monday through Friday from 9 to 5 p.m. for $10.00 a month (remember, readers, that prices were very different then—it was impossible to force more than $3 worth of gasoline inside those large American cars in 1954!). That’s when Mom became serious at both bowling and golf. Before we left Japan in 1957, she bowled the highest score a woman ever bowled in Japan to that date: 270 (for which she rolled seven strikes in a row!). Dad was her teacher, but she was an apt student and very, very good at whatever she tried [for their amusing softball adventure, see “My Competitive Parents,” January 20, 2010); http://douglaswhaley.blogspot.com/2010/01/my-competitive-parents.html]


As I said, Dad was a good golfer, but Mom, compared to other women, was excellent, and the two of them were soon playing matches against any two men on Yokota Air Force Base and nearby similar bases. They almost always won these matches, and Dad began betting small amount on the game by making a bet with the other two golfers as to which would be the winning pair.  Evidentially the amount escalated over the course of a couple of years of such competitions, and therein lies this story. 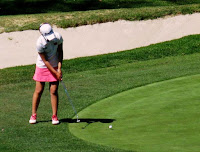 Years later, when I was in law school, there was some event for which I and my fellow students were gathered in the apartment I shared with two other students, all of us there with our dates, dressed up (I forget why), and Mom and Dad were, for some reason, also present. Dad, ever the storyteller, got to discussing these long-ago golf matches, a twinkle in his eye. “Doug’s mother,” he told the assembled young people, “knew there was betting going on, but she didn’t know the amount.  When we reached the green at the final hole one of the other golfers casually mentioned to here that a bet of $400.00 depended on her making a downhill putt, about nine feet from the hole. “She was both shocked and furious,” Dad continued his tale, “and while I was hurrying around moving leaves out of the path of her putt and making soothing noises to calm her down, she hit the putt, I jumped out of the way, it plopped in the hole!  We won the money!” 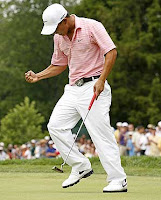 Having told this story Dad then paused and smiled. “Now you think I’d be pleased she made that putt, wouldn’t you?”  We all nodded and his smile broadened. “That shows you’ve never been married. She spent it six times.” 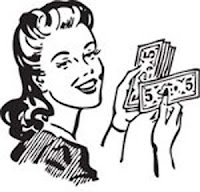 I heard him tell this story a number of times and it was always the same, but what it really meant didn’t register on me until recently.  I got to thinking about the amounts and what they meant in the mid-fifties.  I looked this up on the internet.  In 1956 the value of $100 would be worth $900.87 in 2017.  This surprised me greatly.  It meant that a $400 bet was the equivalent in today’s money of $3,603.46!  Yikes!  That was a lot of money for a couple with two children living on the salary of an Air Force major!   They must have been living much better for awhile—at least until Mom started spending the money over and over again.

Dad did mention that this incident was the end of their gambling on their prowess on the greens.