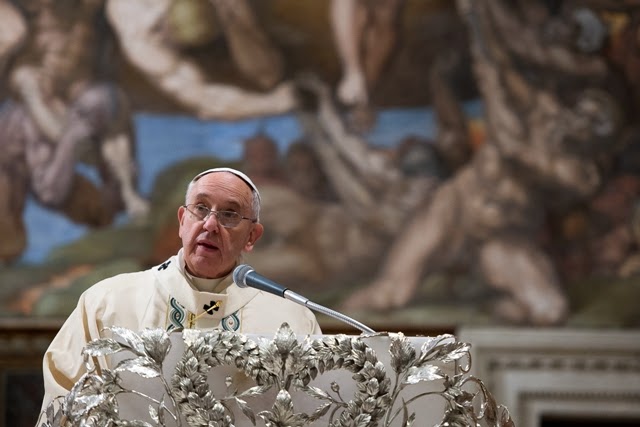 Recently at a mass in Manila Pope Francis made this startling declaration:
The family is threatened by growing efforts on the part of some to redefine the very institution of marriage. These realities are increasingly under attack from powerful forces which threaten to disfigure God’s plan for creation. . . .  Every threat to the family is a threat to society itself.
This is a major retreat from his supportive comment in 2013 when he casually stated in an airplane interview that “If a person is gay and seeks God and has good will, who am I to judge?"  Certainly that question was a startling change from the views of prior pontiffs, and it gave the gay community hope that the Catholic Church was going to drop the virulent homophobia that had so smeared it in the past.  For my blog post on point then see http://douglaswhaley.blogspot.com/2013/08/who-am-i-to-judge-pope-francis-and.html.

I guess this shouldn’t be such a surprise, but it is a disappointment.  From the fresh views Francis’s papacy has taken on so many fronts I was hoping he’d be open to reconsidering the Church’s stance on gay matters.  What’s to be gained from reiterating this tired homophobia?  Surely there is no rational reason for it.  Or is there?  Let’s explore that.

The Pope can’t truly be hoping to force gays into heterosexual marriage, can he?  Such a tactic hasn’t worked well in the past, producing marriages that are deeply troubled with one partner sexually uninterested in the other.  But the Church has always followed doctrines—such as forbidding birth control—which resulted in huge numbers of Catholics in the world, even if that meant incredible suffering for the giant families involved.  My mother, a devout Catholic from a devout Catholic family, was one of nine children: eight girls, one boy (I have 39 first cousins from this group).  My mother and her siblings grew up in a crowded home (when my father first came over to the house to pick my mother up for a date there were so many girls running around he thought there was a party going on).  Those children, when they married, produced huge numbers of offspring.  My Aunt Antonette Kunkel herself had nine children, born into a very crowded household (children slept in hallways for years before they could graduate to a vacated bedroom) which could ill afford that many children, loved though they were.  Starting at my grandparents' level, this family alone produced hundreds and hundreds of Catholics for the Church within two generations.  Some of them, like me, were gay, but they married anyway and produced children, so maybe the Pope thinks he’s on to something.  But it is a cruel thing to do: forcing people into family arrangements that they would not choose but for the heavy hand of the Church dictating that they must.  [Almost immediately after I wrote the above and posted it, the Pope was on the evening news which described his meeting a woman who was pregnant with her eighth child, and him being annoyed that she was not observing responsible parenting since she was breeding like “rabbits.”  He counseled using “church-approved contraception.”  Ah, ha!  That would be the so-called “rhythm method” by which couples only copulate at the moments in a woman’s month cycle when she is unlikely to conceive, a sort of religiously approved guessing game.  It’s remarkably ineffective, and gives rise to an old joke: What do you call people who use the rhythm method?  “Parents.”  If the Pope thinks this is good advice for limiting the number of children Catholics have, it shows he’s never made love to a woman and has no idea what’s involved.  I’m perfectly sure most Catholic parents who follow all the Church’s rules have tried the rhythm method with very disappointing results, as all the studies show.] 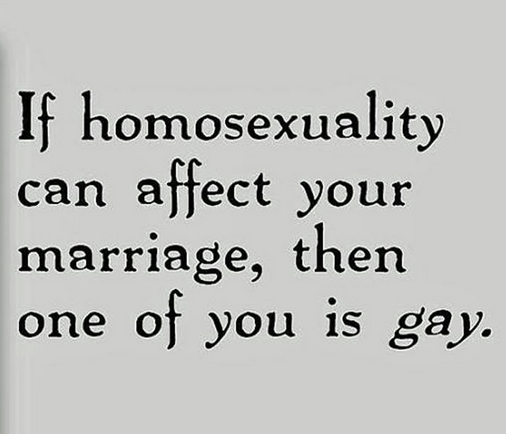 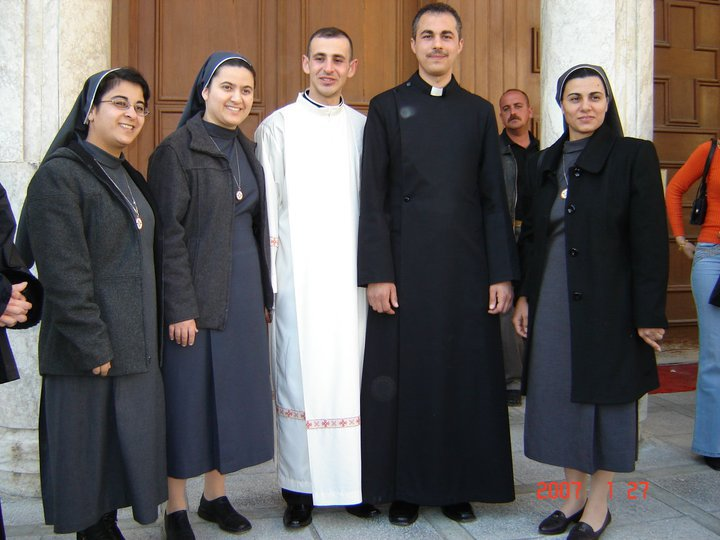 Does the Pope think keeping gays from marriage might send them into the priesthood or the nunnery?  Maybe—certainly that was one avenue of escape for gay Catholics in the past when society provided them few safe havens.  I had a law student in the early 90s who had just dropped out of a local seminary.  He was gay and when I asked him to estimate how many of his fellow seminarians were also gay he thought it over and replied, “Over fifty percent, maybe a lot over fifty percent.”  As far as nuns go there also had to be a good many of them who were lesbians.  I grew up in the Catholic religion [see “Catholicism and Me” parts One and Two: http://douglaswhaley.blogspot.com/2010/03/catholicism-and-me-part-one.html and http://douglaswhaley.blogspot.com/2010/04/catholicism-and-me-part-two.html ] and had many nuns as teachers.  Like all teachers they varied in quality, but the nun who taught me fourth grade was a wonderful human being—the first person to ever tell me I might go far in the world, a statement which very much surprised me.  But while some nuns obviously chose a religious life because of a deep devotion to the church, I always suspected that many of them were hiding from problems when they sought out the nunnery (sexual fears, bad home life, rape, abuse, fear of repeating their mothers’ lives filled with huge numbers of children).  Now that women have so many resources for solving such problems (birth control, workplace possibilities, etc.), nuns are ceasing to exist.  In the United States nuns have an average age of 71!  That’s the average!  With almost no noviciates coming along the path, in this country at least the nunneries will all be closed with a decade or so.

What would the Pope have gays do about their homosexuality?  There is a Catholic organization called “Courage International” which tells gay Catholics they can still be upstanding members of the Church as long as they never act on their sexual desires (that’s the courage part).  But that isn’t a choice many people would make, or, having made it, live up to.  Does he think gays can be changed into straights?  No one who has objectively looked into that possibility would believe it possible—it simply doesn’t work [see “How To Change Gay People Into Straight People”: http://douglaswhaley.blogspot.com/2010/09/how-to-change-gay-people-into-straight.html  and "A Homophobic Organization Throws in the Towel: Goodbye to Exodus International” at http://douglaswhaley.blogspot.com/2013/06/a-homophobic-organization-throws-in.html]. Would Pope Francis advise gay couples to “live in sin”?  Would he tell them that all the legal advantages of being married are morally forbidden to them because Catholic doctrine on point, created in ignorance and maintained on that same scale, demands it?

The Pope and the Church leaders are simply out of step with the times, with common sense, and with common decency.  In the United States 57% of Catholics are in favor of gay marriage, but the Church persists in hounding its gay people.  This past November the Church’s Congregation for the Doctrine of the Faith (the same organization that so thrillingly brought us the Inquisition in the 12th century) held an inter-faith colloquium on “Complementarity of Man and Woman” and invited Southern Baptist Convention’s president Russell Moore, evangelical pastor Rick Warren, and Mormon president Henry Eyring to speak at the Vatican where this event was held.  A major gathering of homophobes, that.  They somehow managed to reach agreement that marriage should be restricted to one man and one woman (nowadays even the Mormons are on board, at least officially, for this conclusion).

The Pope and the Church leaders are simply out of step with the times, with common sense, and with common decency.  In the United States 57% of Catholics are in favor of gay marriage, but the Church persists in hounding its gay people.  This past November the Church’s Congregation for the Doctrine of the Faith (the same organization that so thrillingly brought us the Inquisition in the 12th century) held an inter-faith colloquium on ComplementarityofManandWoman and invited Southern Baptist Convention’s president Russell Moore, evangelical pastor Rick Warren, and Mormon president Henry Eyring to speak at the Vatican where this event was held.  A major gathering of homophobes, that.  They somehow managed to reach agreement that marriage should be restricted to one man and one woman (nowadays even the Mormons are on board, at least officially, for this conclusion).

When I heard that Pope Francis had condemned gay marriage as a matter of Catholic doctrine my hopes for an enlightened reign from him died.  I had then the thought I have so frequently these days when I hear unthinking homophobia coming from the mouths of people who should certainly know better (one of whom is the moral leader of much of the world): how can good people be so cruel?

Many and sharp the num'rous ills
Inwoven with our frame!
More pointed still we make ourselves,
Regret, remorse, and shame!
And man, whose heav'n-erected face
The smiles of love adorn, -
Man's inhumanity to man
Makes countless thousands mourn!