It’s been a long time since I was in a musical, but when Little Theatre Off Broadway [LTOB] in Grove City (a suburb of Columbus, Ohio) sent out audition notices for Stephen Sondheim/James Lapine’s “Into the Woods” last summer, my husband, David Vargo, suggested we should audition.  We did so and were promptly cast: he as the Big Bad Wolf (and also Cinderella’s Father) and me as the Mysterious Man.  It was first time for us to be in a show together, and that’s an experience we will always treasure.

Most of the very large cast (the Act Two finale had 21 people singing and dancing on stage!) were young people, many in their twenties (four were still in high school, and the cow was played by an eleven year-old), lots of them music majors or experienced singers.  Sondheim’s music and lyrics are very complicated, and we were singing to a pre-recorded orchestral score, so the whole thing was quite a challenge.  Indeed both David and I were originally doubtful that LTOB could do a credible job of putting on this musical masterpiece.  But the director was Lisa Cravens-Brown, who had so splendidly directed the last play I was in (“Seascape,” also at LTOB), and the musical director was Bryn Sowash, who clearly knows her stuff too, so we reserved judgment.

We each had a duet in the show, David as the Wolf meeting Little Red Riding Hood (played splendidly by Bridget Harrington), and my character with the Baker (played by the amazing Michael McElroy).  David, a former professional actor, had a terrific time as the Wolf, and his howl at the end of his duet when anticipating eating both Little Red and her grandmother was a crowd-pleaser.  My duet was the song “No More,” which is a lovely number, full of longing and regret as a father comforts his son.

The duets were interesting, and I had a number of scenes with funny dialogue, but the most challenging parts of the show were the two finales, each of which involved complicated singing of complicated lyrics while performing complicated dances.  The youngsters zipped through all of this, but it was more a struggle for David, and most particularly for my 71 year-old self.  Fortunately I was almost always obscured by the other members of the chorus when dancing, so no one (not even the director) noticed my mistakes, or, kindly, at least  no one said anything about my bumbling.

We sold out every performance (there were 12 of them, plus a preview), so “Into the Woods” was a hit for LTOB.  Audiences were astounded at the professional quality of the show, with sets that flew up and down, costumes and scenery designed with storybook-writing matching on both, and elaborate props, including a goose that laid golden eggs, a giant crushed pair of spectacles, a gilded harp, and much more.  The sound was amazing, carefully balanced by a genius so that every word was clearly heard.  The talented cast flew through this complex show, frequently with no hitches of any kind.

David and I threw the cast party (featuring the Whaley martini), and at one point the well-lubricated partygoers sang the following parody of the finale lyrics, which I had written in a moment of whimsy:

On Christmas Day the movie version of “Into the Woods” hits the theaters.  It stars Meryl Streep as the Witch and Johnny Depp as the Wolf.  Our LTOB cast is planning a mass visit to see some performance of the movie together, which should be great fun.  The trailer can be seen at http://movies.disney.com/into-the-woods/video. 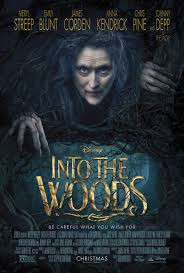 Readers of my blog may remember that I judge most of life’s experiences by what I call “The Deathbed Test,” [see http://douglaswhaley.blogspot.com/2010/07/deathbed-test.html], which asks what memories will cause you to either slap your head with dismay or grin from ear to ear.  This wonderful production of “Into the Woods” easily fits into the latter category.  Many thanks to the entire cast and crew for a terrific memory!  David and I love you all.