The patriarch of the duck whistle family in “Duck Dynasty” (one of the most watched shows on television), Phil Robertson, granted a interview recently with GQ Magazine and made some remarks about blacks:


I never, with my eyes, saw the mistreatment of any black person. Not once. Where we lived was all farmers. The blacks worked for the farmers. I hoed cotton with them. I’m with the blacks, because we’re white trash. We’re going across the field. ...They’re singing and happy. I never heard one of them, one black person, say, ‘I tell you what: These doggone white people’ — not a word! . . .  Pre-entitlement, pre-welfare, you say: Were they happy? They were godly; they were happy; no one was singing the blues.


It seems like, to me, a vagina—as a man—would be more desirable than a man’s anus. That’s just me. I’m just thinking: There’s more there!  She’s got more to offer.  I mean, come on, dudes!  You know what I’m saying? But hey, sin: It’s not logical, my man. It’s just not logical.  [Asked what’s sinful, he replied:] Start with homosexual behavior and just morph out from there.  Bestiality, sleeping around with this woman and that woman and that woman and those men.  [And later in a speech to church members, added that gays should turn to Jesus:]  Jesus will take sins away, if you're a homosexual he'll take it away, if you're an adulterer, if you're a liar, what's the difference?  If we lose our morality, we lose our country.


This caused an immediate uproar, and A&E, which has made a lot of money off of Duck Dynasty, suspended Mr. Robertson from appearances on the show (set to start its new season in January), but when the rest of the family said they wouldn’t continue without him, has now backed away and is hoping the whole kerfluffle will die down.


Many commentators who should know better, such as the Governor of Louisiana (where the show takes place), immediately were outraged that Mr. Robertson’s freedom of speech was being violated.  That’s simply wrong if what they mean by this is that something illegal has occurred.  Oh yes, the First Amendment to the United States Constitution does explicitly guarantee freedom of speech, but look at its wording:


Congress shall make no law respecting an establishment of religion, or prohibiting the free exercise thereof; or abridging the freedom of speech, or of the press; or the right of the people peaceably to assemble, and to petition the government for a redress of grievances. 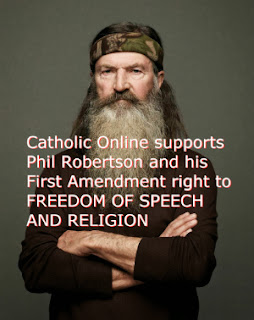 But, you might ask, isn’t there a general right to freedom of speech?  Well, yes, but if people don’t like what you say they can do all sorts of nasty things to you without the law being broken.  But I’m sure that Mr. Robertson and his duck-calling clan signed a contract with A&E that allowed the company to fire them at will if they misbehaved and caused unwanted publicity.


We all have the right to say what we think (with some exceptions: libel, invasion of privacy, fraud, yelling fire in a theater, etc.) but we don’t have the right to escape criticism or other penalties for what we utter, and that includes contractual agreements to keep our mouths shut about controversial topics.


I’m a gay man and an atheist.  If I make statements concerning these issues that upset some people (for example saying, as I have, that it’s impossible to change sexual orientation by praying to Jesus, or that religion is on the whole very bad for civilization) I may be roundly criticized for these remarks (which has occurred).  Evangelical Christians like Mr. Robertson will certainly be offended, and if I were to stand up in his church and stupidly announce these views from a pew, no amount of “freedom of speech” will keep me from immediate and very bad consequences.


What is valid about objections to the public outcry is that “political correctness” seemed to  demand this man be fired or publicly flogged or something equally unpleasant.  To me the proper response to speech that you don’t agree with is to argue the issue out in the public forum.  Huge numbers of religious people believe exactly what Mr. Robertson said about gay people and—an even uglier truth—his brainless remarks about blacks.  We should take this opportunity to make it clear why these views are wrong and even immoral.  If we persuade enough people ratings from the show might go down.


But probably not.  Duck Dynasty’s audience is not likely to care about political correctness on a show about Evangelical duck hunters (and millionaires, who have a very different private life than the one they put on TV—see http://www.youtube.com/watch?v=KW343K1-upo).  It should be no surprise that reality shows reflect what real people believe, whether much of society agrees with them or not.


But whatever penalties there are for expressing unpopular opinions, as long as the government stays of out it, the legal concept of “freedom of speech” is not involved. 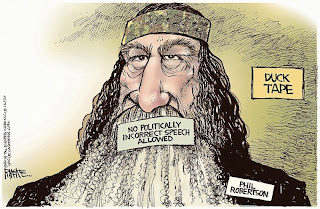