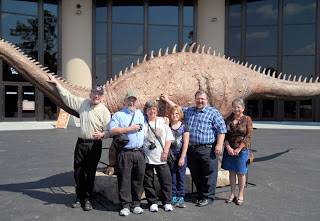 Last Saturday I joined a small group of Ohio atheists who’d decided to visit the Creation Museum in Petersburg, Kentucky (just across the Ohio River from Cincinnati) to see what we would see.  The museum is dedicated to presenting the traditional version of the Bible’s creation story in dioramas, videos, books, a petting zoo, and exhibits of all sorts.  Much money has gone into this endeavor and it is—frankly—quite impressive.  We had lunch before we went with Edwin Kagin, National Legal Director for American Atheists (who has himself visited the museum in the past), and he sent us off with the instruction “Prepare to believe!”  That’s the motto of the museum, and, indeed, I now own a refrigerator magnet bearing that legend.
As one enters the museum there is a large sign warning visitors that this is a privately-run enterprise, and that the views expressed herein are to be respected and not subjected to scorn or criticism. Throughout the facility are stationed rather large intimidating-looking men in uniforms very similar to Kentucky State Troopers, with arms folded and stern expressions, clearly there to enforce reverential decorum among faithful and scoffers alike.

When I stepped up to purchase my ticket, the happy young woman staffing the cash register quoted me the price, including the senior discount, though she (with apparent seriousness) casually commented I obviously didn’t yet qualify for that.  Smiling, I allowed as how I did, at which point she looked at me curiously and asked, “Are you over 60?”  I was delighted!  I replied, “Yes, my dear, but I’ll pay full price if you card me!”  She took me at my word, and the entry fee was just under $24.00.
Why, you might ask, would atheists want to visit a museum explaining creationism at all?  There were certainly a number of our fellow atheists who posed this question, disapproval in the voices.  The answer is that it’s useful to learn what the other side is saying so you can be prepared to refute it.  In this case there was a lot to refute.
The dioramas were fascinating.  They told various biblical stories: Adam and Eve existing happily with dinosaurs in the Garden of Eden,  Noah building his ark and giving instructions in a heavy Jewish accent, St. Paul writing epistles (apparently he was right-handed), etc.  I’m told that a live-size replica of the ark will soon be built at a nearby Kentucky location.  In the loading of the ark diorama the animals included paired dinosaurs trudging up the entry ramp! There was even an explanation of how the animals were fed and watered (though the Bible says nothing about this—apparently the carnivores were fed dried meat).  I couldn’t resist having my picture taken in a number of these settings (click to enlarge). 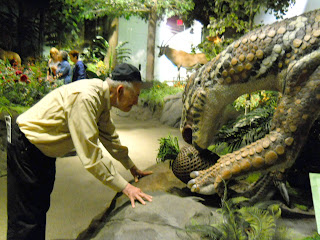 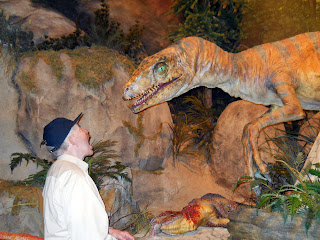 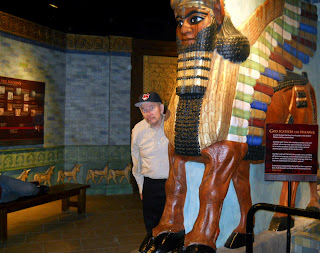 There are a number of exhibits explaining and refuting Darwin and his evolution “theory,” and the bookstores are filled with many tomes on this subject.  Interestingly, the exhibits acknowledge that the idea the earth is only around 6,500 is not validated by scientific fact, but then go on to demonstrate that this should be ignored!  One poster lists “Man’s Word” and then “God’s Word,” and then asks the viewer “Which do you believe?”  For the usual visitors to the Creation Museum the answer is clear.  If man’s facts differ from those God has given us, then God’s version triumphs and man’s facts, however compelling, must be ignored. 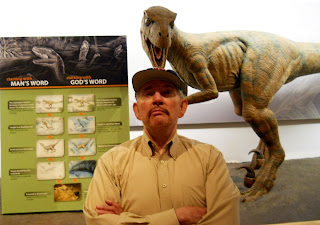 That this leads to scientific illiteracy and contempt for the real world where decisions must be made on some group of facts is apparently of no concern.  Such a casual dismissal of science would be funny if there weren’t huge consequences.  Ronald Reagan appointed a Secretary of the Interior who allowed the looting of the public parks because he was a devout man who believed that Jesus was about to return and thus there was no need to protect the environment.  Arguments put forth by the creationists lead to a distrust and indeed a contempt for science, a dumbing down of our society, and make us look absurd in the eyes of the rest of the world.


Okay.  I’ve visited the Creation Museum, I know what they profess, and I avoided being eaten by overly large reptiles.  Now if a group of creationists want to attend a program put on by atheists, they’re welcome to do so.  To them I boldly say, “Prepare not to believe!”

*       *       *
[Postscript:  On August 8, 2014, a news report stated that the Creation Museum will suspend its Ark project due to declining attendance and serious financial problems.  Apparently those who believe in creationism and are willing to fork over $30 a person to have those beliefs reinforced are a dwindling number.  See http://deadstate.org/kentuckys-creation-museum-in-financial-trouble-due-to-declining-attendance-video/]