On Being a Gay Sports Fan

March 09, 2012
.
I've recently returned from a trip to California where I made the keynote speech for a law school symposium at the behest the law professor organizing the event who is (a) a former student of mine and (b) gay.  At one point we were talking and he commented that when people learn he's a rabid sports fan they're usually surprised since gay men (unlike lesbians) are reputedly not interested in sports.  I told him I'd had the same experience.


I grew up in a sports family.  As is related in numerous blog posts ("My Competitive Parents"), my parents were both fine athletes (as golfers they once won the Bermuda International Amateurs Couples Open), and my sister and I were raised with sports as a constant in our lives.  One post ("Put Out at Home Plate") details how the proudest my father ever was of me was the time I was the catcher for his Air Force slow-pitch team and had a stellar moment at home plate.  In other sports I was mediocre at best.  I could play tennis, but not well, and held my own on a couple of volleyball teams.  I've written before ("Bowling With Charleyne") about my limited prowess with a bowling ball (though I bowled with my parents often when growing up, was in two leagues at once in Chicago while practicing law there, and still own a bowling ball and shoes).  When in high school, I broke my leg while roller skating.  For two summers, as related in a prior post ("Doug, Take Me With You"), I was a camp counselor dealing with nine year-old boys, and in that role had active sports involvement with the kids. 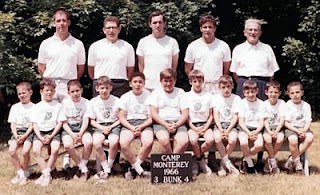 I was always a strong swimmer and in my senior year in high school (the summer of 1961) I was a lifeguard at the Langley Air Force Base Officer's club prior to reporting to the Navy for active duty.  That summer my co-lifeguard was named Johnny Post, and the girls swarmed around him, which Johnny liked a lot.  In those days I was very nearsighted (corrected in later life) and had to wear thick glasses to see.  On my first day as a lifeguard I didn't wear a t-shirt and ended up with a bad sunburn, so the rest of the summer I did wear a shirt and put on layers of lotion.  I sometimes wondered what I'd do about my glasses and the shirt if called on to save someone, and one day I found out.  I noticed a small girl having major trouble staying afloat just into the deep end of the pool, so I dived in, and, ignoring all my Red Cross training, just scooped her up in my arms and pulled her to the side of the pool.  She was fine.  When I climbed out I asked a concerned Johnny what I'd done about my glasses (I was wearing the soaking wet shirt).  "Well, Doug," he replied with a grin, "it was really interesting.  You suddenly jumped up, tore off your glasses, threw them down hard onto the cement, and dived into the pool."  Yikes!  But, fortunately, the glasses were unharmed, and I was a momentary celebrity.


So all my life I've been an active sports fan, growing up with parents who were sports nuts.  Dad would have played professional baseball—he tried out once—as a catcher except that in his last year of college he threw out his arm showing off.  Mom bowled the highest score a woman had ever bowled in Japan (as of 1956), rolling seven strikes in a row for a 270 total.  And—wow!—were they good at rooting for whatever team they cared about.  When Mom finally saw Mickey Mantle (her hero) play live in Kansas City and hit a home run, she turned to Dad, my sister, and me, and calmly announced, "I'm ready to die."  Watching any sports event she would frequently go bananas, and was finally barred from Dallas Cowboy games when she accidentally broke a rib of the friend of the family who owned the season tickets.  One time when I was an adult she and I went to Churchill Downs for the horse races.  We weren't doing so well at winning any bets and finally up came the last race.  It was a dismal day and it was raining, but I'd gotten very interested in the tote sheet, reading all about the horses who were to race that day, and I told Mom to cheer up—in the final race one of the horses was what they call a "mudder" (meaning that he did well running in mud), and in fact this particular horse had never lost in that situation.  So we each put a six dollar bet on him to win and Mom was most downhearted to see when the odds came up on the big board that our mudder was 17 to 1.  "Are you sure, Doug?" she asked me with a frown.  "Absolutely," I assured her, faking it.  When the race, a long one, began our horse was in front.  "He's in front!" Mom moaned, knowing that a horse that starts out in that position almost never finishes there.  I said nothing, but I later learned that mudders frequently do this because they hate being splashed by mud and so stay ahead of the rest.  As the horses rounded home stretch our horse was still ahead, and Mom suddenly came to life, jumping to her feet and going into major cheering mode.  Very loudly (in a volume I inherited from her—I can quiet a large noisy room with one bellow) and with major gestures and jumping up and down, she rooted him home, causing such a commotion that people around us stopped paying attention to the race and just stared at her, jaws dropped.  I believe some of the horses actually looked up too.  When our mudder crossed the finish line still in the lead, the celebration continued for some time.  [Years later, when I left law school in Austin, Texas, my former roommate, Jim Kunetka, sent me a letter saying that he'd been going over to my parents apartment to watch the Olympics because they had a color TV, but now he was going over there just to watch my mother watch the Olympics—"I've never seen anything like that!" Jim commented.] 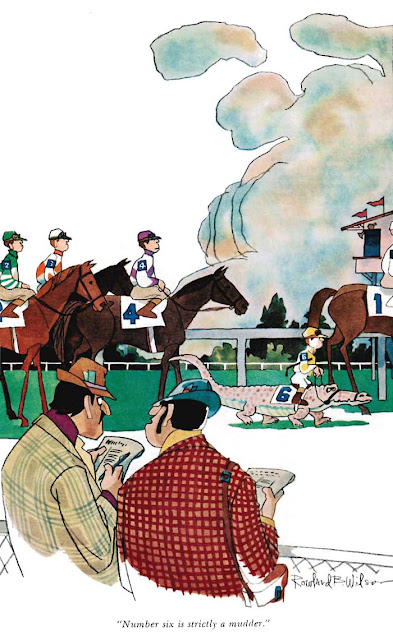 This blog has commented on my enthusiasm for sports in a number of posts ["Basketball and Its Announcers," "Football Advice for Coach Jim Tressel," "Potpourri #1" (about being a Chicago Cubs fan)].  While at Ohio State I had season tickets to all of the football games from 1976 until the early 2000s when my health failed and I had to watch the games from home.  In that period my seniority on the OSU faculty increased to the point where eventually my assigned seats were on the 45 yard line, three rows up from the field.  Since 1976 it's been very rare that I've missed seeing a Buckeye football game either live or on TV (I routinely have up to 13 people at my house watching games—see photo).  With OSU basketball I had half-season tickets for years and saw lots of those games live too, typically with a good friend Tom Jeffire (with whom I saw the game live at Value City arena this year where the Buckeyes stomped Indiana).


This past year I watched all the OSU football games and every single one of the basketball games, but when my bridge partner fell ill and I started going over to his house to watch the basketball games with him and his wife, they were both amazed that I knew the jersey numbers of the OSU players.  I assured them that I also knew the names of the starting Texas players (U of T is my law school alma mater) and some of the starters for Maryland (my undergraduate college, not often on TV this year).  My bridge partner and his wife frankly confessed that their amazement was because I was gay and they'd shared the usual supposition that gays aren't sports fans.


My recent post about Urban Meyer ("Urban Meyer and the Christian Buckeye Football Team") was picked up by other blogs and has generated much more attention than I'd anticipated (almost 500 hits this past Tuesday).  A number of the adverse comments (which I duly appended to the post when I could have just deleted them) seemed to imply that because I was gay I obviously didn't care about football at Ohio State.  That's wrong, and I should have said so in the post.  When Urban Meyer took over the team I was excited, hoping this famous coach would rescue the program from the dismal mess of last season.  But I was disturbed when I learned he was conducting Bible study groups that were quasi-required.  Some of the comments about the post informed me that Meyer absolutely wouldn't discriminate against a player who declined to participate in the Bible studies (held, I've learned, on campus at the Woody Hayes Center), and that the only thing Meyer truly cares about is whether the players are good on the field.  I certainly hope that's the case.