A Control Freak Turns 50 and Throws His Own Party

Turning 50, which I did in September of 1993, is always a shock, but since such big birthdays are going to happen, I decided the choice was between crying in my beer or throwing a party.  And no—not just any party would do.  Control freak I have to confess I am, I planned a very structured festivity and then set back to see what would happen.

I decided on an evening of entertainment where, ahead of time, friends could decide things with no direction or help from me.  I would ask my friends to perform songs, skits, or read poetry that they didn't know at all.  And by this I meant everyone at the party was to perform.  Most people could do this by just singing the opening number as a chorus, but others would be assigned more specific challenges.  50 year-old Doug would be just a member of the audience, seeing it all for the first time.  It all worked beautifully.

I'm a Gilbert and Sullivan aficionado  (see below for "A Fanatic's Tale—This Isn't Pretty"), so the opening number was the entrance of the Wise Men from G&S's operetta "Utopia, Limited," which has a short choral introduction, a duet by the two advisors to the King, and then a short choral finish.  I sent everyone an invitation with and explanation of how the party was structured, along with a CD of the song and sheet music.  I had gone to college at the University of Maryland with another G&S fan, Wayne Pawlowski, and we've remained close friends ever since.  He and his partner Ted Heath were asked to play the Wise Men (Ted had never sang a Gilbert and Sullivan song before, though Wayne has dragged him to many of their shows in the last 30 years).  They live in D.C., but to my great pleasure agreed to drive all the way to Columbus and do this incredible thing.  I left all details of how they'd stage it (performance space was one side of my living room, with my then partner Jerry Bunge doing all the stage management, sound, lights, etc., as well as performing himself at the end).  When the evening itself arrived, the opening chorus was enthusiastic if not ready to go professional, and then Wayne and Ted entered in black tie and tails and zipped through the duet with great elan.  At one point the song has them singing about "minding your p's and q's," so they pulled out a bag of frozen peas and two pool cues and solemnly presented them to me.

My son Clayton, then 21, was not able to attend the party, but, at my request, he made a video that we next showed of him singing "The Sentry's Song" from G&S's "Iolanthe," with piano accompaniment by Dorit Samuel (wife of Sheldon Halpern, who performed later).  Clayton, who has a lovely bass voice, added an extra lyric at the end: "On Douglas Whaley's 50th birthday, everyone gave a loud fa-la!"  I love him very much.

My cousin Jane Birge and her longtime partner Nancy Lawrence, both now transplanted to Texas, had agreed to drive from there to my party to recreate the Angel Skit from the Off-Broadway hit "The Kathy and Mo Show," though they'd never heard of it before.  I sent them a video of that show (still available on the internet, and I recommend it to you), and they went to work.  I could write twelve blog entries about Cousin Jane (and so could anyone who knows her) and a number on Nancy as well—two of the great characters of our time.  Both are very funny, not shy, and, indeed, Nancy was once a professional actress (appearing once on the Andy Griffith Show).  The skit is a hoot.  It's about two angels in heaven planning how people on earth will behave once created.  "Who should have the babies," one asks the other, "the men, the women?"  They haphazardly pick the women for this task, but then worry men will be jealous, so they try to think of things to make childbirth less attractive!  When the skit was performed Nancy and Jane nailed it, in full-length angel costumes complete with haloes, and wonderful timing in their comic delivery.  They threw in some Doug jokes too.  The audience went nuts.  I've posted the video of this Angel Skit on YouTube; go to http://www.youtube.com/watch?v=OSriBOHqpw8. 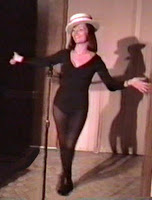 Mary Bush is the friend in Columbus I've known longest (we met in 1976 shortly after I moved here to start teaching law at Ohio State).  She too started as a professional actress, but now has a business selling antique dolls and also teaching nutrition in a culinary school.  One night years ago, during the Strange Songs period, there was lots of singing around the piano with—alas—a microphone on.  At one point, was Mary was coaxed into singing the "tits and ass" song ("Dance Ten, Looks Three") from "A Chorus Line,"  and she was most unpleased when I played the recording for her a day or so later, claiming it was nowhere near her performing standards.  So now, for the party, I asked her to redo the number anyway she liked, and the audience was wowed by her very sexy rendition, complete with straw hat and leotard.  You could take her right back to Broadway and tickets would explode out the box office window.

Sheldon Halpern, also a law professor at Ohio State, then recited William Gilbert's comic poem "Etiquette." This is the story of two Victorian men stranded on an island who feel they cannot talk to each other because they've not been introduced.  Beforehand Sheldon warned me that he is no fan of Gilbert's, but his recital was so good that I told him he could sell a recording of Gilbert's comic poems with that wonderful voice he brought to the party that night.

The finale was assigned to my partner Jerry, who I paired with Lorri Latek and her husband Arthur Greenbaum (another law prof), our very good friends.  Indeed, though the decades, they have become close family.  The number they were to perform is "Triplets," which Fred Astaire two others sang in the movie "The Band Wagon."  It concerns triplets who hate being triplets, and is a fast-paced affair that includes dancing.  How, I wondered ahead of time, would they manage to look like triplets, but, as the photo below shows, the ever-resourceful Lorri had no problem putting it all together.  Since Jerry and Art both  have beards, she simply gave herself one.  These identically dressed triplets, carrying oversize baby bottles, brought down the house in diapers, bibs, and bonnets.  It was a terrific ending to my 50th birthday party, and I was overwhelmed by the love all these great friends showed me as I notched up a half century on Planet Earth.
In some future post I'll tell you about my 60th Birthday Party, which involved me performing with some of these same people.  They were all willing to do this madness again.  May you have friends who are so wonderful!
________________________________________