March 31, 2011
.
After the death of my father in 1980, discussed in a prior post, my mother, LeNore Whaley, moved to Ft. Walton Beach, Florida, to live with my sister Mary Beth Colpitts, her husband Richard, and their daughter Cindy. That lasted for a number of years, and then there was some sort of discord (I stayed out of it), and in 1984 Mom called me with an interesting question. "If I moved to Columbus, Doug, how long do you think we'd get along?" I paused. She was not happy that I was both an atheist and a homosexual, but we were great friends and loved each other a lot. She wouldn't like it that I was now living with Jerry Bunge (who had just recently moved in) and that the only reason I hadn't been excommunicated was that Catholicism had apparently long ago ceased to care about my spiritual fate.

"About half an hour," was my reply, and that made her laugh.

﻿
"Then I think I'll move back to Jasper, Indiana," she told me, and that was a surprise too. She was a world traveler by this time, having left Jasper at age 23 to marry an Air Force officer, and, except for visits once or twice a year, had not been back a great deal to see her very large family (seven sisters, one brother, all Catholics). Jasper is a small and pleasant town, but it had long ago ceased to be her home. She asked for my help with some financial and legal matters, and I was glad to give it.

﻿
So LeNore Whaley returned to the place she was born in southern Indiana (near Evansville). By this time she was suffering mightily with emphysema, meaning that she needed an oxygen mask to breathe, taking it off only to go to another room and have a cigarette. Both she and my father (who died of a heart attack five years before) had been heavy smokers all their lives—their parakeet Dummy learned to imitate their individual coughs.

﻿﻿
At first things in Jasper were good, and Mom was reunited with her sisters and other relatives, who did valiant work to keep her happy and as healthy as possible. I went down and visited her with my son Clayton in December of that year. Mom was living in a small house and had a female companion who looked after her. I offered to give Mom a new parakeet (Dummy having died himself of lung trouble), but she said she didn't want that. I left hoping this would work out, but Mom's condition deteriorated. She would collapse from lung trouble, an ambulance would be summoned, and off to Jasper Memorial Hospital she'd go. When this started happening more than once a week, Mom's sister Gerry LeMastus called me. "Doug," she said, "your mother can no longer live alone. She needs to go into a nursing home, and fast. We've all tried talking to her, but she won't listen. Can you come down here and convince her?" Not an easy task that, given that my mother had very definite ideas about what she would and would not do, but I agreed.

On Tuesday, March 26, 1985, I flew to Evansville, rented a car, and drove to Jasper. I arrived at Mom's house, but her companion told me that she had just been rushed by ambulance to the hospital, so I went there. I met Mom's doctor, who looked all of 20 years old, and he softly told me, "Your mother is coming to the end of her disease." Quite the euphemism that. I took it to be an awkward death announcement and numbly nodded my head. He showed me into the room where she was recovering, and she glanced at me, eyes widening. "You look a lot like my son!" she announced. "There'd be a reason for that," I confessed, "I am your son. I'm here to visit and I find you in the hospital." She was very pleased to see me, and I took her back to her home that evening.

Now came the hard part. I spent the two days explaining to her that she had to go into a nursing home. "NO! NO! NO!!!" was her response. "I'm happy here." "Mother, you can't be rushed to the hospital every other day. You can't afford it. They'll quit coming. So there's no other choice. I will make the arrangements immediately." "NO!" "There's no choice, Mom," I repeated. "Oh, yes, there is!" "What?" "I'll die!"

That stopped me. She meant it. And, Bible in hand, she went to her bedroom to pray.

I flew home (classes were going on), planning on making the arrangements, but Mom was rushed to the hospital again within a day, this time never to leave. My sister Mary Beth and her husband Rich, with daughter Cindy (then age 9), flew to Jasper on April 7th to be with our mother. By this time she was largely incoherent, but she did get to see her granddaughter one last time, and she told Mary Beth and Rich not only that she was dying, but invited them to go with her if they liked (her sense of humor being intact until the very end).

Mary Beth was with her for 72 hours. Towards the end the doctor told Mary Beth that Mom wouldn't live more than a few hours, but then when Mary Beth asked for pain pills the idiot said he was worried she'd become addicted! ("I thought about slapping him silly," Mary Beth later told me). Mom got the pills and died on Wednesday, April 10, 1985 at 3:33 a.m.

The funeral was held in Jasper two days later, and I flew in with my son Clayton, then age 12. At the funeral home (closed casket by family tradition—"I don't want people to last see me dead," Dad had always said), all the family and friends were there. So many rosaries were said loudly by the entire group that Clayton, with no religious training, managed to memorize the "Hail, Mary" by the end of the evening.


Mom was buried next to my father the following day at the Cox Cemetery outside Birdseye, Indiana, where many a Whaley, going back to the Civil War, is laid to rest. It is a beautiful little cemetery, on a hill, overlooking many trees. There were lots of tears. 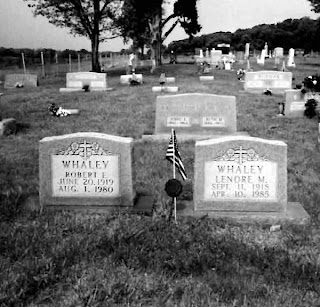 Both of my parents died of cigarettes at relatively young ages. Dad was 61 and Mom 66—it's very sad to have lost these vibrant people that early in their lives. I spoke to my sister before writing this post, and Mary Beth and I agreed that it's almost impossible to believe they could have died at all. We both miss them very much.﻿﻿