Recidivist: A Criminal Who Does It Again

September 10, 2010
In a prior post (“I Married a Hippy,” April 14, 2010), I explained how Charleyne and I met and came to be wed immediately after she finished taking my course in Contracts (required in the first year of law school) in 1971. Watching me teach day after day, she’d fallen in love with me and decided on marriage. That’s a tremendous compliment, but not exactly the response I mean to trigger in students. Following our marriage and my coming-out (see post mentioned above), I had long-term relationships with two men: David and Jerry. This post is about Jerry.

Jerry was relationship-phobic, being a free spirit who rarely went out with the same man twice, but who nonetheless had a great deal of fun. His parents thought him heterosexual (of course), and, since Jerry is a masculine take-charge kind of guy, there was nothing stereotypically gay about him, which meant he had a very good time remaining happily, if noisily, in the closet.

Jerry entered law school in 1983 at Ohio State, and was in my Contracts class. In those days Professor Rhonda Rivera, one of the most effective gay activists in the 1980s and 90s, who was also on the law faculty, annually competed with me to see how many students we could get to come out and join the gay legal students group (a social club mostly in those days, but now in 2010 it’s a force to be reckoned with at the OSU Law School, where it’s amusingly named “The OutLaws). By putting up signs and word of mouth, Rhonda and I plus others encouraged students to attend a gay event (held off campus) for law students and local gay lawyers. Jerry and I met socially when he showed up, a bold move on his part. I forget whether that year Rhonda or I won the most gay male/lesbian student contest, but there were a healthy number of students present, say 20 in a student body of 700. If that sounds low, remember it was 1983, a much more chancy time for being openly gay, particularly if entering the legal world.

I noticed Jerry was attractive: muscular, bright red hair, great smile, but since my Charleyne/student days I’d adopted an ironclad rule against relationships with students, and it never crossed my mind to have non-platonic thoughts about students. I’m not kidding—control freak that I am, I’m very good with rules, especially self-imposed ones.

Sitting in class, Jerry fell in love with me (see why I quit teaching?). This considerably annoyed him, and he didn’t act upon it in any way. We’d sometimes run into each other at school or gay bars and then talk, but there was no hint of sex/romance that I was aware of. I do remember one weekend right before the final exams in May of 1984. That Sunday afternoon I drove Clayton, my son, then age 11, back to Charleyne in Indianapolis, since he had school the next day. In this period I went out to the gay bars rather frequently, so when I returned home that evening, I switched my mental state from “father” to “gay adventurer,” worked out, changed into tight black shirt, black jeans, and leather boots, and went downtown to The Tradewinds. Back in those days (and, now by custom) most gay bars didn’t get going until midnight so as to better escape the notice of heterosexuals. Arriving at the bar around that time, I procured a drink, saw a friend I knew, and went over to talk to him. It was exam time at the law school, so I had no classes the next day, though in the afternoon I’d have to proctor my Contracts exam (a three hour essay, constituting 75% of the resulting year-long grade). While chatting with my friend, I casually noticed Jerry walking by on his way to one of the bar’s other rooms. Instantly I switched mode again, dropping “gay adventurer” in favor of “outraged law professor.” “WHAT ARE YOU DOING HERE?” I asked, perhaps too loudly (though in a gay bar that may be impossible). “You have an exam tomorrow!” Jerry looked sheepish. “Well,” he replied with a grin, “I’ve always found it best to relax and clear my mind the night before an important exam.” Thinking that the stupidest thing I’d heard all year, I gave him my frank opinion of this practice. He pretended to agree, and went off (perhaps he did go home to bed, as suggested, but the smart money, placed by those who know Jerry, would be otherwise). Perhaps he was right (grrr); he did make an “A” in the course (which was graded anonymously).

When my good friend Tim came to Columbus for a visit during the holidays of that year (Jerry’s second in law school), I decided to throw a New Year’s Eve Party in his honor, inviting the old gang from the days when Tim lived here before moving to San Francisco. A few days before the party, Tim and I were in The Tradewinds, and ran into Jerry. I introduced him to Tim, and then, more or less as an afterthought, invited Jerry to the party. Jerry said it sounded like fun, and, by golly, he came. At the party itself there was a lot drinking (marijuana too), and late in the evening I was standing the dining room observing six or so people at the dining room table playing the drinking game called “Quarters” (in which you bounce a quarter into a shot glass, and, on that happening command someone else at the table to down the shot of whiskey). Jerry, in the adjoining living room to my right, made up his mind: this was the moment for his move. He walked in front of me, turned to look at the Quarters game, and then “accidentally” backed into me. As it happened, I was positioned against the light switch, which was promptly pushed “Off” by my backward motion, causing immediate protest from the gamesters. Confused by Jerry’s move (duh!), I turned and switched the light back on, pacifying the players who resumed their game with gusto. Where was Jerry? Oh, he was by the front door, pulling on his coat. “I must go now,” he told me when I came over. As I went to shake hands he grabbed me instead, and I was kissed. I don’t mean a little kiss. I mean KISSED. Then Jerry vanished out the door, leaving me standing there totally bamboozled.

“Jerry! Jerry is attracted to me!” As I mulled that fact over I suddenly realized I was very attracted to him. Oh, no! Another student! No!!! 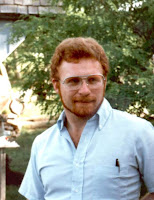 But love will find a way, as they say (and, readers, remember this was in a different era when dating students was not the hanging offense it subsequently became). How to proceed? I knew it would have to be done carefully. So, after some thought, I scheduled a playreading (see “Elena Kagen and Me,” May 23, 2010, for a description of this social activity), and invited Jerry and five others. When they arrived and before Jerry got there, I informed my friends a romance might be in the offing, so when the play was over they should—as Lady MacBeth put it when her husband saw a ghost at their banquet—“stand not on the order of your going, but go at once.” 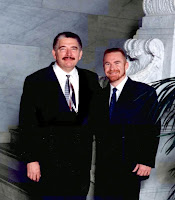 Good friends that they are, as we folded the playbooks they departed with amazing speed, and Jerry and I were left alone. I offered him a drink, and, to make sure I wasn’t misreading the situation, let him make the first move. Never shy (and I mean never), Jerry promptly did that, and by January 22, 1985 (thereafter celebrated as our anniversary), we lived together. The two of us were as married as allowed in those days, until we were forced apart by circumstances in late April of 1997, twelve years later. Before that unfortunate event happened we had a wonderful time, and it’s a major tragedy we aren’t still a couple. We were quite a team together, and, while we’re still close, he’s in Las Vegas and I’m in Columbus, Ohio, and I miss him. More stories about Jerry and I will undoubtedly surface in this blog in future posts, and there are some doozies (see, for example, one already told: “Dog Meat,” December 27, 2009). 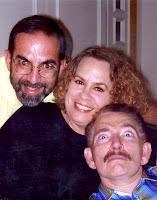 One last footnote to this story: that first January here I was living with a law student, something I was not anxious to broadcast. I felt I had to tell someone. The obvious choices were by best friends (key components of my current chosen family) Art and Lorri (see photo). He was on the law school faculty with me, and I was forever either over at their house enjoying the incredible meals they put on the table (both are terminal foodies), or they at mine for Buckeye football games or playreadings or assorted other madness.

So I called them up, invited myself over to their house, made them raise their right hands and promise to tell no one, and sighed and said, “I’ve formed a relationship with a law student.”

“Oh,” Art and Lorri both murmured, bemused as they pondered the issues that presented. Art then spoke first.

“Weren’t you once married to a law student?” he asked, accusation in his voice. I nodded glumly.

He considered for a moment. “So. You’re a recidivist!”