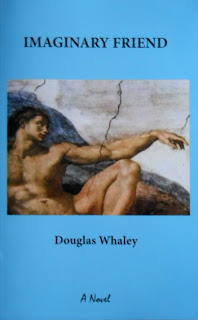 In a prior post [“Frightening the Horses” April 7] I described how I wrote and damned near published my first novel back in the early 90’s. After that sad failure, I put down my non-legal pen for over a decade, but as I neared retirement in 2004 I began to plot out a new novel. It was to be called “Imaginary Friend.”

The genesis of the novel was the growing concern I had about how atheists are treated in American society. In a casual conversation it is almost considered rude to mention that you’re an atheist (while those around you have no such hesitation about bringing up God, or Jesus, or “blessing you” at any and all moments). In a 2003 Gallop poll 52% of those surveyed said they had an unfavorable or mostly unfavorable attitude about atheists; in another poll large numbers of people said that they would vote for a black, a Jew, a woman, or even a homosexual for president, but only 39% would pull the lever in favor of an openly atheist candidate. Discrimination against atheists, while not legal in employment or housing (freedom of religion), is socially widespread.

Ever the teacher, I decided to use a novel as a way of explaining how atheists see the world, and demonstrate why they’re not the demons so many people believe. In 1988 when I first went looking for an agent, I had no problem finding one (30 wanted to read the manuscript, and five offered to represent me), but due to the bad economy that has changed. Publishers aren’t accepting many new authors (indeed, they’re mostly letting go old ones); agents get 100 submissions a week from aspiring authors. I couldn’t even find an agent willing to read the ms. (receiving almost always form rejection letters). It would be one thing to be turned down because of the quality of the work, but another entirely never to be given a chance to show its worth. But, happily, self-publishing has undergone a great change in the 21st century. I went with Amazon.com, which charges the author nothing at all to publish a new book, but then takes a slice of any sales. I was very pleased with how professional the large paperback Amazon produced looked. The publication attracted the attention of a New York City film producer, who purchased the movie rights, but it now appears his plans have fallen through (sigh---I had visions of me stepping from a limosine at the premier).

My novel is an atheist thriller (new genre). Franklin Whitestone, a Columbus lawyer, becomes a hero in a terrorist attack, and then gets on a Larry King-like show, where he stupidly admits to being an atheist, and (having had a drink ahead of time for courage) says that believing in God is like believing in an imaginary friend. Well, that does it. He loses his girlfriend, his job, and he and his family are soon on the run, fighting for survival. Here are the only three reviews published on Amazon:

“Imagine if: After the horrors of 9/11, a man who bravely helped rescue some 50 odd survivors in a highly visual fashion was videoed doing this incredible feat. He'd be a proclaimed a hero, paraded around, commended by The President and promptly shoved on some news show (ala Larry King Live) and made to talk about the experience. What would happen if he decided (with a little alcoholic lubrication) to say to a caller that God was not there to give him the strength to save the survivors, but that following an "imaginary friend" was exactly why terrorists were killing people.

“Thus is the premise of "Imaginary Friend." Franklin Whitestone, hero of a 9/11 styled attack on a football stadium finds his life turned upside down when he announces what he really thinks about God on a national television show. He and his family swoop from American Heroes to American Pariahs in the scope of two days, once the faithful feel threatened more by a single atheist and his family than multiple bands of terrorists. Whitestone, his son Todd and his former wife Mary now have to dodge a marauding press corps, Money Grubbing Mega-Church leaders, old girlfriends, unhappy employers and gun toting ChritsoFacists if they want to live through a quintessential American Nightmare resulting from not being very careful what you say in front of a live microphone (or post on the internet).

“Inventive and well thought out characters make this a compelling read, as does the detailed writing style. The description of Nan and Dan's gun collection is alone enough to give you the creeps. Todd Whitestone, the precocious and gifted 16 year old son, is also a highlight of "Imaginary Friend" as he tries his best to help his father from a jam. Catherine, Franklin's alpha-mother, gets the best laughs as the Queen Bee of the Whitestone hive. Add the satirical bent of our instant-celebrity culture (an agent who advises Franklin just how rich he can get with a good PR man), and you get an entertaining novel about just how absurd the world of organized religion can get.”

“The atheist movement, slowly growing in this country, has been given a sudden boost from an unknown author named Douglas Whaley whose new novel, "Imaginary Friend," combines an impassioned polemic with a sophisticated thriller. The attempt alone would have been enough, but the end result is more powerful and entertaining than anything the atheist movement (or, for the most part, the thriller movement) has come up with so far.

“The story is about a lawyer, Franklin Whitestone, who rescues 53 people from a burning stadium but becomes a hunted man when he speaks candidly about his atheist views on national TV. The breathless chase across Ohio involves not just Franklin but Franklin's family, whose escape from their demented kidnappers is one of the high points of the novel. Franklin meets some colorful characters along the way, including Corbin Milk, a gay ex-C.I.A. agent who helps Franklin with his disguise, and Jonathan Harker, a PR agent who insists that Franklin can make tons of money from his ordeal. Even the God-fearing militant hunters have their virtues and sympathies. One is often pleasantly surprised, even relieved, by the humor that Whaley mines from the darkest and grisliest situations.

“For many years the atheists' cause has rested on the shoulders of writers like Richard Dawkins, Sam Harris, and most recently, Christopher Hitchens, whose logical arguments, while unassailable on their own terms, often fail to take the fight where it would really count, namely, the psychological realm. Religious fanatics will not be swayed by any number of scientific arguments that disprove the possibility of talking snakes; they hold the trump card of "The Lord works in mysterious ways." But if you can tap into their basic sympathies for their fellow man and demonstrate how destructive religion has been to innocent people (including all the deaths at the football stadium, bombed by an Islamic terrorist), you might be able to turn some heads. This is where "Imaginary Friend" succeeds so well.”