The Second Anniversary of This Blog: Greetings to the Planet Earth

At this second anniversary of my first post, I start by thanking the thousands of readers who have visited this site.  Every day when I look at the list of visitors (who are identified in the stats by city and country only), I'm overwhelmed.
As I explained last year on the first anniversary of the blog (see "Related Posts" below), this blog has unexpectedly changed my life.  It occurred to me the other day that my musings were really a form of autobiography coupled with my life philosophy and the outpourings of a compulsive teacher who (rightly or wrongly) has a lot to say on a wide variety of topics.  Then there are the stories I get to tell in final form (having told and retold them all my life).  I'm from a family of storytellers (the high-falutin word is "raconteurs"), and my favorite stories have turned into blog posts, one after another, detailing the adventures of my family, friends, partners, pets, and people I barely know.  Taken all in all—stories, philosophy, advice—this blog constitutes the most important writing I've ever done in my entire life (and this includes my large output of legal works and various novels).
Why?  Because I know from the feedback I get that people like these posts, and some posts have been life-changing for my readers.  That amazes me.  When someone in Tunisia writes me that he's able for the first time to face his own homosexuality because of my blog, or a teenager in the United States writes to ask if he should come out to his parents even though they've announced they'll kill him if they learn he's gay (I said no, but told him to plan his escape route now), or someone in Jordan tells me that "Muslin Atheist" perfectly describes the hell that surrounds him, or one reader sends out dozens of copies of "Going Undercover at an Ex-Gay Meeting" because she thinks it should be mandatory reading, I'm jolted.  When I wrote my first post two years ago (pitiful thing that it was), I had no idea that I would end up communicating with the world.
As of this morning, 156 countries have visited my blog since August 22 of last year (there were no accurate records for the first nine months of the blog).  Here is a list of the top fifty countries visiting the blog since then (each "Hit" is a visit by someone from that country, including repeat visitors):
You can find the complete list of all countries by clicking on View My Stats under the StatCounter symbol at the top left of each page of this blog.  On the screen that pops up on the left Country/State/City/ISP produces this list of countries, or allows the reader to see a similar list of cities.  If instead of Country/State/City/ISP you click on Recent Visitor Activity you come upon a screen that lists every visitor to this site like this:
Number of Entries identifies how many pages of the blog the viewer visited (each page contains about six blog posts).  Thus the visitor from Dearborn, Michigan, visited one page (which had on it the post about mortgage foreclosures), while the visitor from Iraq spent a lot of time on the blog since he/she visited seven pages of posts, staying on the final page for 2 minutes and 41 seconds.  The "0 seconds" on the entry for the Dearborn visitor means only that he/she did not move to a second page.  Here are the first 20 visitors from this morning (Dec. 17): 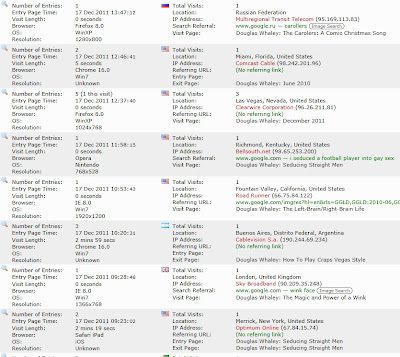 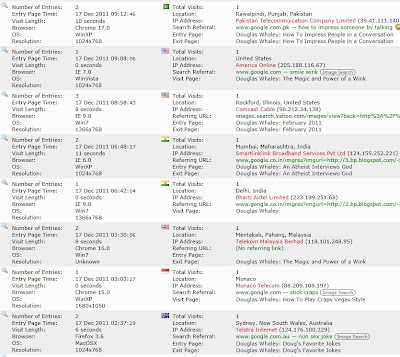 These data record fascinating things about the visitors.  For reasons I can't explain a post entitled: "How To Impress People in a Conversation" is very popular in India, but nowhere else on the planet.  The posts having to do with sex—no surprise—attract visitors from all over the world.  Some people searching for one thing (such as "How to communicate with God") end up with something else ("An Atheist Interviews God").  There are quick visits, by which I mean that the visitor took one look at a post and immediately clicked away.  An example: someone Googling "sexy notes" would reach my post about preventing mortgage foreclosures because the promissory note is missing ("The Sexy Promissory Note"), not at all what he/she was looking for (even though it has a cute cartoon of a promissory note with its arm around a hooker).  The opposite of that is someone who stumbles upon my blog, likes what he/she finds, and reads everything.  A couple of months ago someone from Birmingham, England, read all that I've  ever posted, which took two weeks of reading.


The top three most visited posts as of yesterday:

In the beginning I wrote fancy titles for the posts, ones that seemed fitting for them.  My favorite post, for example, is entitled "Benjamin Franklin Riding Shotgun."  It has this conceit: suppose you are driving your car and all of a sudden Dr. Franklin is magically whisked from his own time and placed on your passenger seat.  What questions would he ask, and could you answer them?  This game, which I've often played when stuck in traffic, has interesting results, most notably (and humbling) that I can't explain to this great scientist much about the world of the 21st century, becoming stumped over and over by his questions.  The problem with this post is that its name tells so little, and that means, I now understand, that it gets ignored.  I've learned, therefore, to title the posts with Goggle searches in mind.  Thus a post entitled "How Many Homosexuals Are There in the World?" is found by its audience.
In the beginning of the blog, I wrote two posts a week.  But that has decreased in number this past year.  Why don't I post more often?  I simply can't write a post just to post a post.  If I’m going to write something, I must have something to say.  At the start I was overflowing with stories to tell and advice on many topics, but as I've fed my life into the blog, I've grown cautious of cheapening the quality of that which follows.  I suspect some posts will interest or entertain anyone who reads them ("Adventures in the Law School Classroom" for example), while others have a very limited audience ("The Ohio State Hospital Nurses: A Letter to President Gordon Gee"), but I want them all to be worth reading by someone.
Alas, there are some posts I can never write because they would detail embarrassing stories about people yet alive who would drop me as a friend immediately (and—damn it!—good stories thereby go untold).  Others would be too painful for me to relive or others to read.  Some (and, again, some real barnburners) are too salacious for the blog.  On the up side, I've learned to use Photoshop, and have a great time choosing images from the Internet, altering them, and using them as illustrations for my posts.  To see Old Doug having a good Photoshop time, look at "I Hate Meetings."  The image of the man in the stocks, for example, did not originally have a gag in his mouth.  Nor was the monkey in the "Zoo Stories" photo originally holding a pair of glasses.
Whenever I post a new blog entry, I put that fact on Facebook so my friends will know there's something new to read.  Otherwise, I don't use Facebook for anything.  If you, reader, would like to know when there are new posts, simply send me a "Friend" request, and I'll confirm it, even if I've never heard of you.  It would be a privilege to be your Friend, and I want interested people to know when new entries are posted to my blog.  Or send me an email asking to be alerted to new posts, and I will send out a mass mailing to that effect when one is available.  My email address (listed in my profile) is dglswhaley@aol.com.  Put the word "Blog" in the Subject Line.
Mostly what I've experienced from writing this blog is the thrill of communicating with the world.  I have readers from countries I'd never heard of, like Brunei Darussalam (I looked it up—it's in NW Borneo)!  The thought that someone on the other side of the world is reading a post I wrote just last night is a wonder of this new millennium.  It frequently doesn't seem real to me at all.
One final thought: of course I'll die someday (and my nephew Adam has been designated to post a blog entry so stating), but as long as Google itself doesn't fail, this blog will be available forever.  That's another startling concept about the whole improbable undertaking.
I end as I began.  Thank you all for reading these postings that I love so much to write.