The duplicate bridge club to which I belong has an annual "Holiday Dinner" at this time every year which includes both a meal and then a large-field bridge game.  At this year's event I was seated at dinner next to one the players, an older woman named Donna.  As the salad was served she remarked to me, "Last year, right about now, we had to sit through an 'Invocation' that sounded a lot like a prayer, and I hope that won't happen again."  Amused and interested, I asked Donna if she was an atheist, and she nodded vigorously.  Just then a microphone-enhanced voice from the head table announced it was time for the invocation.  Donna snorted in annoyance, and as we were all instructed that at this time of the year we should all feel grateful for the blessings conferred upon us by "Our Lord," she continued to eat her salad in determined defiance of the message.  I did not bow my head, as most people in the room automatically did, and when I looked around I noticed quite a number of other bridge players who were similarly nonconforming, looking stoically straight ahead until the invocation ended and the speaker moved on to  announcements of club business (including applause for those who organized the event, which was dutifully given by us all).


What should atheists do during public prayer?  Is it offensive to ignore it as if it weren't happening, as Donna did?  If she were asked, I'm sure she would reply that it's offensive to presume that everyone should participate in praise of a deity many present don't believe exists.  The next day I asked a Jewish friend of mine if a public prayer at Christmas time that mentions "Our Lord" bothers Jews, or if they pretend that those words refer only to the God of the Old Testament.  He replied that Jews have a long history of going along to get along, and that offending Christians hasn't worked out very well in the past.


The world is changing, and the number of people who are not religious is increasing.  Customs that presume otherwise should be rethought.  If I were the person who was running a public event of this kind, I would work hard to say something that would be inspiring but would offend no one.  Something like "We thanks you all for coming tonight, and in the spirit of joy and good will towards all that pervades this season, we hope everyone has a good time and increases the friendships this organization has long fostered.  Now to club business . . . ."


Is this the secularization of Christmas?  Of course it is, and it's appropriate when those gathered together are not there to participate in a religious ceremony.  In an actual church, a sectarian prayer to the deity of choice is expected and participation is rightfully mandatory.  But in a public gathering, a prayer to, say, Jesus Christ, is an announcement that other religious views must bow to this one.  That's either insensitive if it's done without thinking of how it will be perceived by non-believers or those of another faith, or offensive if performed with awareness and conscious disregard of those who are not Christians.  In any case, a public prayer seems to announce that those present must either join in the prayer or suffer the contempt of those who do.


I was raised a Catholic in a family that celebrated Christmas in the traditional Christian way.  My mother always took my sister and me to midnight mass, where hymns of praise were sung by us all (though my mother's famous inability to sing would cause some stares).  I enjoyed this magical time of the year and our family rituals (some being traditional and others being silly things like Mom coming home from that late mass and making fried baloney sandwiches for the four of us while we badgered her into agreeing to open "just one" gift each, inevitably leading to unwrapping all the booty).  When my sister and I became adults, living far from each other, these traditions died out.  My sister and I now exchange Xmas cards, and that's it (my parents are both dead).  With my chosen family in Columbus—all of them non-sectarians—we have a traditional Xmas meal, and give gifts to the children, while toasting each other with eggnog and stronger spirits.  Human beings have had rituals at the time of the winter solstice since civilization began, and we've created our own version from many sources, Christianity being but one of them.  A good time is had by all as we rejoice in friendship and love. 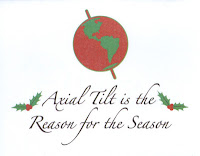 What does an atheist do if he/she is at a private home and a prayer is said at the start of the meal?  In such a situation I take great care not to draw attention to myself.  If "Let's bow our heads" is commanded, I don't do that, but I do look down, and that usually suffices.  In such situations I'm a guest in the home of religious people, and I respect their right to celebrate their faith at mealtime.  If asked, I say exactly that.  But if someone pushes it ("Don't you believe in God?") I smile ruefully and confess that "Alas, I'm a nonbeliever, but I'm grateful to be included in this lovely meal," and then change the subject to something else.


What should a non-theist do if asked to give the prayer?  In the rare situations where this has occurred to me, I demure ("Please, I'd rather not") and request that someone else do it.  If it is insisted that I lead the prayer, I promptly bow my head, my hands in my lap, and intone something like this: "We are very grateful for this gathering of friends and the fine meal that has been prepared for us.  May we appreciate the blessings life has sent our way, and rejoice in them."  Someone almost always then says "Amen," at which point I smile happily and suggest we eat.  In such a private setting I don't push my non-belief on others, and can only hope they respect my right not to lie and participate in a paean to a God that is not mine. 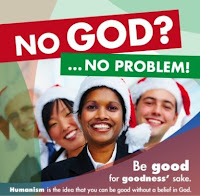