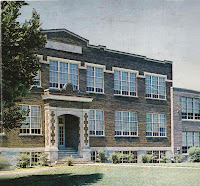 My first three years of high school were spent in a suburb of Nashville, Tennessee, at Donelson High School (1958-1960), before my family moved to Virginia and I had my senior year there.  During those three years my best friend was Robert Newton Startup, who lived three blocks away from my family's house in Donelson.  We were the greatest of friends, spending huge amounts of time together, laughing, getting into trouble, learning to smoke and drink, climbing in and out of windows to escape parents, and more.  His note written in my copy of the 1960 yearbook mentions "the road block with the broken leg, the days you didn't go to school, and the secret of the attic," among other adventures.  "The days you didn't go to school" is a a euphemism for our frequent cutting of classes, and "the road block with the broken leg" must refer to some incident I don't recall having to do with the leg I broke while roller skating when I was sixteen.

But here's the secret of the attic: 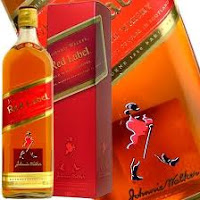 My father, Lt. Col. Robert Whaley, was stationed in Nashville for this period as the Air Force's liaison officer to the Civil Air Patrol.  The CAP was a private organization of people with their own air planes who would go into the air to help in certain situations: disasters, looking for missing cars, etc.  Of course the people who owned such air planes tended to be rich, and my father was one of the most charming humans on the planet, so he got along well with them all.  One of them, who owned a business that imported liquor, would send Dad a case of Johnnie Walker Red Label Scotch each year at Xmas time.  Dad, a scotch drinker, would open it up with delight.  Bobby and I discovered that the case contained 18 bottles, but it was easy to rearrange the cardboard dividers so that it looked like there were only supposed to be 12 bottles.  We'd do this, and spirit away six bottles, which we hid in the back of the attic (which could be accessed only through my bedroom on the second floor).  Decades later I asked Dad if he'd ever discovered this teenage theft, and he smiled ruefully and said that "no, you got away with one."  Johnnie Walker Red was the first hard liquor that Bobby and I had ever encountered, and we became quite fond it.  Through the years when people ask me how I became a scotch drinker, I smile and think of Bobby and I clinking our glasses together in that attic as we learned to appreciate fine scotch.

He was a terrific friend and when I moved away we kept in touch for a couple of years, but then, as these things happen, we lost track of each other. 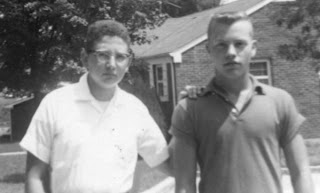 Flash forward to 1982.  As I've described before in this blog (see "Related Posts" below), I spent the 1982-83 school year as a Visiting Professor at the University of California Hasting Law School in downtown San Francisco.  That fall I was teaching the first year in Contracts and I gave the students a practice exam, with the grades I assigned not counting anything—the idea was that they could get used to what a law school essay exam looks like and how it's graded.  I handed back the much-marked-up bluebooks in class and then told the students that their grades were posted on the door to my office (with coded numbers used instead of student names).  They rushed from the class to go examine the posting, and that presented me with a difficulty: I couldn't go back to my office until the crowd had cleared (and no one wants to talk to students who've just gotten their first grades in law school, even ones that don't count).  What to do?  The answer was to park my classroom books with the law school's front desk and walk around the beautiful city of San Francisco for awhile.  When I stepped out onto the sidewalk I realized that the SF Public Library was just across the street, and, a lover of libraries since a boy, I promptly went in.  Wandering around I discovered something called the "Telephone Book Room," which contained telephone books from across the country.  Hmm.  Who to look up?


Bobby, of course.  I pulled down the Nashville phone directory and under the entries for "Startup" I was delighted to find out that Bobby's grandmother was still alive and living at the same address of old.  I wrote down her phone number and called her that evening.  When she answered, I identified myself and said, "I know you won't remember me, Mrs. Startup, but when I was in high school, your grandson Bobby was my best friend."  She laughed and replied, "Of course, I remember you, Doug.  You and Bobby used to sit in my kitchen and devour cookies."  My next question was to ask for contact information for Bobby, and her voice lowered.  "I'm so sorry to tell you this, Doug, but Bobby died of cancer this past summer."


I sat there stunned as Bobby's grandmother explained that Bobby had become a high school principal, had married and produced two (three?) children, and had died in Houston at the large medical center there which specializes in cancer.  Tears in my eyes, I declined her offer to put me in touch with Bobby's widow, who, I reasoned, didn't need to hear from more mourners.


I can't tell you how deeply this startling information affected me.  It's the oddest thing, but I was depressed for two weeks.  I hadn't seen or even much thought about Bobby for many years, but neither had I written finis to our friendship, and the fact that he had just died (at age 39!) was a blow that flattened me all these years later.


In the 1960 Donelson High School yearbook Bobby had written a long note.  It concluded with this statement: "I hope our friendship will always be." 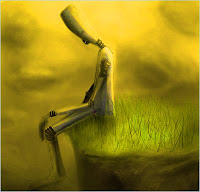