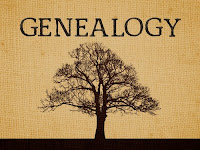 As I explained in a prior blog post [“Goodbye to St. Paddy’s Day” at http://douglaswhaley.blogspot.com/2010/03/goodbye-to-st-paddys-day.html] the legend in our family was that the Whaleys in this country came from Ireland in the 1800s during the potato famine which sent so many starving people here, and Noah Whaley, who fought for the Union Army in the Civil War, was one of these, a man who walked from Virginia to Indiana leading a horse on which his pregnant bride rode.  But my sister, Mary Beth Colpitts, became very interested in genealogy and began tracing back the Whaley line, and she promptly put an end to that legend.  “Yes, Douglas,” she told me on the phone, “there was a Noah Whaley, and he did fight in the Civil War, but he was born in Indiana, and as far as I can tell the entire Whaley line was either English or Scottish.”  That was a surprise, coming six years ago.  At that point she’d traced the Whaley line back to Nathaniel Whaley, born in 1760 in Maryland, and she sent me the data she’d compiled with dates, marriages, and children.  It was a shock to discover I had no Irish blood (my mother’s side of the family are all Germans), but, on the other hand, it was interesting to think that Whaleys could have voted in all presidential elections, starting with George Washington’s. 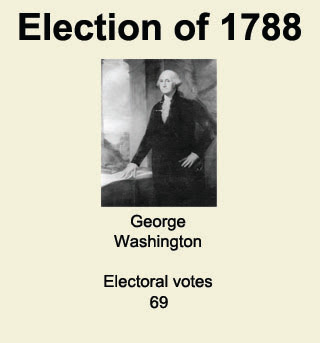 It was also a surprise this past Christmas when a “Whaley Family” book arrived from Mary Beth on this same topic.  Here’s the cover: 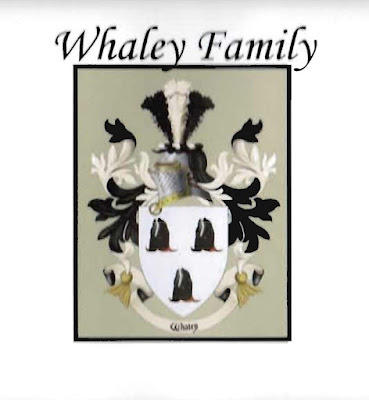 The first page started with Robert Edmund Whaley, her father and mine, and about whom this blog has had much to say [see Related Posts below].  The next page dedicated itself to our grandfather, John Alvin Whaley, a railroad company man, and then on to his father, Irvin Whaley, who is pictured below at the 50th wedding anniversary celebration he and his wife Nancy celebrated on December 22, 1922 (that’s Nancy and Irvin, third and fourth from the left behind the row of children).  My father (who got it from his mother), my son Clayton, and I all have very curly hair.  When I showed this picture to Clayton and told him his three year old grandfather was in the picture and asked if he could point him out, he instantly put his finger on the second boy from the left, which is correct.

Next comes our great-great grandfather, Noah Manoah Whaley (that’s right: Noah Manoah), who fought in the Civil War as part of the Indiana 49th Regiment, a corporal in Company I.  This regiment walked all the way to New Orleans and back!  He was wounded at the Battle of Vicksburg, and was mustered out when his enlistment ended in November of 1864 (five months before the war itself was over).

Perhaps the most interesting of the Whaley ancestors is Edward (“Regicide”) Whaley (1615-1674), who had a major part in the arrest, trial, and execution of Charles I of England.  Two of his forbears had been Sheriffs of Nottinghamshire, but he rose to prominence in military actions during the English Civil War when he fought in battles led by his cousin, Oliver Cromwell.  When Cromwell prevailed and the King was arrested, Edward Whaley and his regiment were given the task of guarding him, treating the King so well that His Majesty wrote him a letter of thanks.  Well he might have, for Whaley was embarrassed when the King escaped!  The King was recaptured and Whaley had to make a report to the House of Commons in 1647.  He was found not to be at fault and was then appointed to be one of the King’s judges at the trial, subsequently being noted as the most senior figure regularly attending court sessions.  When the King was found guilty and the warrant for his execution issued, Whaley was the fourth person to sign it (immediately under Cromwell’s signature in the far left of the reproduction below).  [A copy of this famous document was hanging in the library at the University of Texas Law School when I was a student there, and I noticed “Edward Whalley” as a name on the document, and wondered if he was perhaps a relation.]  Whaley prospered thereafter, becoming military governor of the Midlands, and a member of House of Lords.


When Charles II assumed the throne in 1660, Edward Whaley fled, with his son-in-law William Goffe,  first to Switzerland and then to America, arriving in Boston.  A massive search was on for all of the regicides and the loyal British citizens of Boston joined in.  Whaley and Goffe decamped to New Haven, Connecticut where they lived in a cave in the woods for three years on and off while Royalist agents hunted for them!  Finally they found refuge in Hadley, Massachusetts, in 1664, where they conducted a small trading business with local Native Americans.  My sister tells me that books have been written about all this, and I plan to look into that further.  There is still a Whalley Avenue in New Haven that was named after 8 x great grandfather Edward.  A more detailed discussion of his life can be found in Wikipedia at https://en.wikipedia.org/wiki/Edward_Whalley.

My sister’s splendid book, complete with photographs and maps, then traces the births and deaths back to “deWalley,” my 20 x great grandfather born in England in 1240.  The records become nonexistent in the thirteenth century, but the location of the Whaleys in Lancashire, England, in a town called “Whalley” was well established by that time, and they were clearly descended from Wymarus deWhaley or his brother, Stephon.  He had been born in Neustria, Normandy, in France in 1040, and, with his brother, came over in the army of William the Conqueror when he invaded England and prevailed in the famous Battle of Hastings in 1066.  Both brothers were knighted for their services to the King in the battle, and Wyamarus was granted the Lordship of Whalley, Wapentake of Blackthorn, Lancaster County in England, at which point the brothers adopted “Whalley” as their surname.  The town of Whalley is there, having a population of 3,629 in the 2011 Census.  Spelling of surnames in England was haphazard for hundreds of years, with “Whaley” being rendered with two “l”s or just as “Wale,” “Wally,” or Waley.”  All Whaleys are believed to trace their lineage back to the father of these brothers, though the father’s name is unknown.

Of course what’s obvious is that my relationship with these various Whaleys grows more and more tenuous as the “greats” attached to the word “grandfather” pile up, but Mary Beth has done a prodigious amount of work establishing these links.  My son Clayton (to whom she also sent the book) and I were pleased and amazed to see these records and, however remotely, sense some sort of connection with these once very real people. It is thrilling to sit and page through their records, one Whaley after another, generation after generation.

A happy final note.  One of the Nathaniel Whaleys (my 6 x great grandfather) married an Irish woman named Mary Dale in 1712.  This means, my original confusion notwithstanding, I do in fact have Irish blood in my lineage, so “Erin go bragh!” after all! 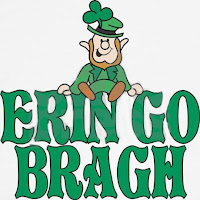