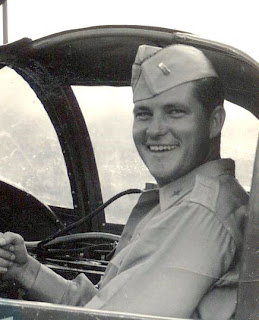 As I've related before (see "Bob and Kink Get Married," June 2, 2010), my father, Robert Whaley, left college in his senior year (the spring of 1941) to become a pilot in the Army Air Corps (which became the U. S. Air Force by war's end). He married my mother, LeNore, six days after the Japanese attacked Pearl Harbor, and then spent six months in training before volunteering for a "special mission," which turned out to be flying drones from another plane over the Panama Canal to simultaneously test radio-controlled aircraft in tropical salt air and run live target high altitude training missions for anti-aircraft troops. This was not the sort of thing Dad had envisioned as his major contribution to fighting the Nazis, so he spent the war vainly writing transfer requests for combat duty.
﻿

In another prior post, Robert Whaley himself described some of his adventures in Panama, where he crashed a plane when the controls locked up while he was trying to fly one of the drones ("No Pennies In My Pockets," July 30, 2010). But this post is about his myriad other adventures while stationed in Panama. His squadron spent its time at the Río Hato Army Air Base, which was used by the Army Sixth Air Force as part of the defense of the Panama Canal. Dad's squadron lived at the edge of the base, with jungle all around. One night, walking back to their barracks from the Officer's Club, Dad and two of his friends, all well lubricated, encountered a black panther in their path. "Son of a bitch!" one of them shouted as he kicked the surprised panther in the rump and sent it scurrying into the brush. They told him about this the next day, but he had no memory of the incident and assumed they were putting him on. 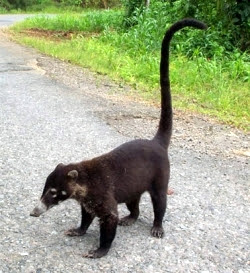 When a travelling Panamanian carnival went broke, the men of Dad's squadron brought six or seven of its animals under their care, including a dog, a goat, and a monkey. But the animal that became the squadron's mascot was a coati mundi, a South American member of the raccoon family, which they named "Charlie." He was great fun for the men to play with, and he had full run of their quarters, frequently hanging from the rafters from his prehensile tail and dropping on unsuspecting passersby. Charlie was into everything, a very inquisitive animal, and he loved to gather items (like toothpaste, cigarettes, and chewing gum) and then mash them into a pile. He'd then slather the mess on his tail. Why? They had no idea. But his curiosity was such a problem that everything had to be carefully locked away lest they be added to Charlie's next tail-decorating spree. [For years as a little girl, my sister Mary Beth was given the nickname "Charlie," because of her propensity for getting into things—I ran across a photo of her recently that had that name written across the bottom in my mother's handwriting.]

When they were not flying drones around the Panamanian skies, the members of the squadron of course did a lot of drinking, particularly at the Officer's Club on base. They would run quite a tab in the course of an evening, and Dad later told me that the only way to avoid having to pay it yourself was to grab the bill when it was presented and sign someone else's name. When one of the men, routinely slower or drunker than the others, was hit with a monthly OC bill of $275 (a large sum of money in the 1940s), the squadron commander called all the officers into his office, bawled them out, collected money pro rata to pay the $275 bill, and made them promise to keep separate tabs in the future.

Dad came down with malaria during his stay in panama. It's a dangerous disease resulting from a mosquito bite which infects red blood cells via the liver, and in extreme cases it can lead to death. Dad's skin turned alarmingly yellow before a doctor filled him with "so much quinine I could have swam in it," as he later commented. He was worried malaria would return throughout his life, but the quinine worked and he remained free of the disease.

When I was a teenager I discovered (I don't remember how) that Dad hated the game of bingo. "Why?" I asked him. His reply went like this:

"I always thought it was a dull game—a slow form of gambling with no skill involved. Put me at a poker table instead and I'd happily play all night. When I was in Panama during the war, the base Officer's Club sponsored a monthly bingo game where big expensive prizes, worth hundreds of dollars, were given to the winners. It was very popular and my squadron buddies were always saying, 'Bob, you have to play bingo with us—we've each won great prizes!" I resisted until a fellow lieutenant named Arthur made me a $100 bet that I'd win something if I attended one of these bingo sessions and played all evening. That was a bet worth taking since the prizes—things like major pieces of furniture, which would be sent to your home back in the States—were always worth considerably more than $100. 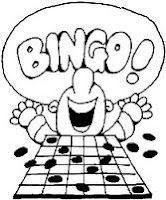 "So I went to the game with my friends, and dutifully marked my bingo card game after game. Sure enough, I yelled bingo during the last game. However, so did someone else. We were called to the stage where the Captain running the game told us the winner would be decided by a coin toss, with the loser getting a carton of cigarettes as a consolation. I called 'heads,' the coin came up tails, and so I was handed the cigarettes and wished better luck next time. When we returned to the barracks, I told Arthur to pay up, but he pointed to the carton of cigarettes. 'You won something,' he calmly replied. 'But a carton only costs one dollar!' I protested. 'Is it something or not?' he asked. The lawyer in me knew he was right, so, grumbling, I paid him $100 for the most expensive carton of cigarettes sold in 1943."