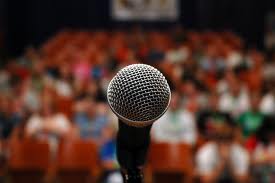 Public speaking comes naturally to some people, but for many others it's a terrifying prospect to stand before a group of people and give a talk. I've made my living doing that, and I've learned a lot about what helps and what does not. This post is designed to give you basic tips on how to calm yourself down and make the best presentation you have in you.

In prior posts I have reprinted snippets of my novel-in-progress "Corbin Milk," which is about a gay CIA agent who uses the fact that he is gay to do undercover work for the agency. [See "The Thunderbolt," September 3, 2010, for more of his background and the short segment of the novel when he meets George Yancey, with whom he falls in love.] The portion of the novel that follows occurs when Corbin, having just completed a very successful assignment dealing with a Russian leader who was secretly gay, takes George home with him for Christmas to meet his family in Sacramento:

When George returned to the house, it was his plan to brief Corbin on the conversation he’d just had with Corbin's father, but when he entered the bedroom he was stopped by the expression on Corbin’s face as he sat at his laptop computer, staring at it in horror. His eyes were unfocused, and could those be sweat beads forming on his forehead?

Corbin gestured vaguely in the direction of the computer screen. “My recent successes have made a large number of people at the agency want to meet me, so the Director of Human Services wants me to make a speech to the organization at large. The topic would be homosexuality!” He said the last word as if it were a hideous curse.

George shook his head. “I still don’t understand what the problem is,” he said.

Corbin looked up at him, wide-eyed. “I HAVE TO MAKE A SPEECH!”

George put a hand on his shoulder. “You make it sound like a sentence of death!”

“Oh, George, I just can’t! I’m terrified of public speaking! I’ll make a fool of myself and nobody will respect me. I’ll never be given another assignment, or, if they do take pity on me, I’ll be stationed in some place like Albania taking man-on-the-street surveys about the reputation of the United States Government.”

“Now, Corbin. Grab hold of yourself. I thought Corbin Milk wasn’t afraid of anything. And public speaking? How is that different than all the plays you were in during college?”

“Then I was reciting lines someone else wrote.”

“Then how is it different from inventing what to say to Russian agents who were about to shoot you?”

“They weren’t an audience. They were antagonists I had to persuade or die.”

“Can’t you persuade your CIA audience to do what you tell them?”

George furrowed his brow. “Oh, come on, Corbin. You’re a homosexual. Surely you have something to say to the CIA about how it should deal with its gay personnel.”

“Corbin, this isn’t you. I’ve never seen you flailing about like this. If you’re so bothered by giving a speech, just tell them no thanks.”

Corbin scowled. “I can’t do that either. I’m a team player. I do what I’m told.” He paused and thought about it, starting to calm down. “And if I could somehow pull this off and do it well, it would be great for my career.”

“Well, I’m not afraid of public speaking. Disguise me as Corbin Milk and I’ll do it for you.”

“Hmm. That does give me an idea. Uncle Lawrence.”

“Now there’s a man who has something to say about homosexuality.”

[Corbin's Uncle Lawrence, a professor at a San Francisco college, reputed to be "the gayest man in San Francisco," arrives shortly thereafter and promises to help Corbin with his speech. On New Year's Eve the following segment occurs:]

Uncle Lawrence snagged Corbin as he passed by, and, patting the sofa next to him, demanded his nephew sit down. They clinked eggnog glasses and sipped.

“I have the solution for your speech-making difficulty,” he told him.

“First of all, you need to radically change your attitude about the task.”

“That sounds right. Anything other than absolute terror would be terrific.”

“Think back. We’ve all seen very nervous speakers get up in front of an audience and hem and haw and generally embarrass themselves.”

“Consider what the audience itself is experiencing. Watching such a performance is also torture for them. Most people feel empathetic, and suffer right along with the unfortunate speaker. What’s wrong with this picture?”

“That the unfortunate speaker is named ‘Corbin Milk’?”

“No. What you should focus on is that no message is being conveyed. Instead, everyone in the room is thinking about the speaker, not the speech.”

Corbin considered that. “Okay,” he said. “So how is this fixed?”

“By forgetting about the speaker and concentrating on the speech, of course! The inexperienced presenter is focusing inward on what he’s feeling, not outward on what the audience will be hearing. It mucks everything up. All good teachers—and I’ve learned this painfully in my own classroom—should see everything not from their own point of view, but from that of the students. What are the students hearing? Anything else is just interference.”

“You practice ahead of time, just as if you were in a play, but you focus not on what you’re doing, not even on what you’re saying, but instead on what your listeners are hearing. You must have something important to say, or you’d only be wasting their time. Say it and sit down.”

“But there’s the problem, Uncle Lawrence. I don’t have any function at this event other than to show up and be admired. And I’m not going to be admired if I come across as a bumbling idiot.”

Lawrence frowned. “Corbin, correct me if I’m wrong, but your assigned topic is homosexuality. Is that right?”

“Does the CIA understand homosexuality?”

“Well then, this is a golden opportunity for you to enlighten them! I will write your speech for you: short and sweet and filled with important content. You, talented nephew, will memorize it, practice it, and then—concentrating on the message and not yourself—deliver it perfectly.”

Corbin eventually does just that. To read the content of the speech Corbin finally gives, which I adapted for this blog, see my post "Straight Talk," May 10, 2010. But if you, reader, have to deliver a talk in public, remember this advice: don't concentrate on yourself, concentrate instead on what you have to say. Just before you begin to speak ask yourself "what is my message?" With that in mind, give that message as clearly and concisely as you can, and then sit down. Ahead of time, plan both your first sentence (something that will get their attention instantly) and your last sentence (something nicely phrased that sums it all up) carefully. Knowing where you start and how you finish, you're grounded and set to go.
________________________________________
Related Post: