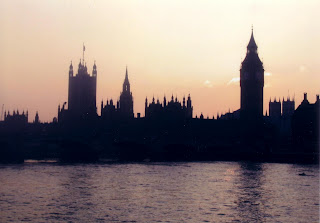 On Sunday, February 13, 1977, when I was still quite new to the gay experience (having finally come out the year before), I went to a Valentine Day Party here in Columbus, Ohio. Not long into the evening I glanced around and saw a man standing some distance away to whom I was immediately strongly attracted. By that I don't mean that he was beautiful or the epitome of my sexual fantasies, but simply that I knew getting to know him was very, very important. We were meant to be together. I know this sounds like "Some Enchanted Evening," and I can't help that. It just happened. I walked over to him and asked if I could borrow a cigarette (he was smoking, and this sort of opening gambit was very common in 1977, when everybody smoked). His name was David, and, luckily, he had the same overwhelming reaction to me. The Italians call this phenomenon "The Thunderbolt," and I assure you it's quite real. By the end of that week we were living together.

But there was a complication a month later when I had to leave David for ten days for a scheduled vacation in London with eight gay male friends. It was too late to change things so that he could come along, and, indeed, in the end David house-and-dog-sat for one of the couples on the trip, Pat and Fred. This meant that at a moment when I was very much in love, I had to leave for a trip I no longer really wanted to take. I spent much of this vacation longing for Columbus and David. During the trip I kept a diary to show to David when I returned, and any unexplained quotations in what follows below are from that diary.

On March 17, I flew with Pat and Fred to New York, where we met up with the others: Howard and David (NYC natives), Richard and Gary (from DC), and Bob ( a former student of mine) and his long-suffering partner Paul (both ex-Columbus-ites now living in Chicago,). I say "long-suffering" because Bob was forever hopping into bed with every good-looking man who passed by, a trait that was all too much on display during our UK visit.

On the plane flight to Gatwick Airport outside London on Monday, March 21, 1977, we discussed how we were going to explain nine men travelling together. In 2011, of course, we'd just say we were gay, but in 1977 that would cause much trouble in a world that was still very homophobic. Our solution was inspired: we would pretend to be the American Duckball team, come to England to represent our country in the International Duckball Finals. Of course there's no such game as duckball, but who knew that for certain? Starting on the flight, and as a running gag throughout the entire trip, we invented rules for this mythical game. For example, it had tri-sector time periods of twenty minutes each, had been invented in Scotland but was not popular in the USA, involved protecting a real duck from being snatched by the other team, etc. We kept embroidering our invention with details about what happened during our various matches (supposedly the only people attending the games to cheer us on were the men Bob had picked up since arriving). Alas, we lost all of our games. Our first match was supposedly scheduled for Wednesday, March 23 against Afghanistan ("We are not expected to win since we haven't had a workout, though we do drink a good deal.") We lost that game (37 to nothing), and my diary note says that "I protested the last goal, but in vain." When he was out of the room, we all voted to make Fred the goalie, an amusing choice since Fred was not sports-oriented, nor much interested in the duckball madness. On Friday of that week we played Tunisia (28 to nothing), and on Saturday we were eliminated from the competition when Nepal stomped us (42 to 1—but, boy, were we proud of that goal!). All in all, this was good fun to pull off, and gave us a ready cover whenever some curious person asked what we were doing in England. No one disbelieved this incredible tale, which was much more likely than that nine faggots would dare to travel together. The heterosexual presumption, and particularly in those days, was both enormous and blind.

We stayed at the Russell Hotel (not in the best repair in those days, having odd features such as nothing but hot water in the taps and toilet, but rooms cold enough to see your breath). Our days were taken up with tourist things, much theater, and exploration of the gay life in London. On Tuesday we found a private gay club named "Napoleon" that was very nice, and we returned throughout the trip. As is required by law for gay men, we indulged in quite a bit of shopping, visiting places like Harrads, the famous department store, or Chelsea where I bought a leather jacket and a British military-looking t-shirt that read "Join the Army, Travel to Distant Exotic Lands, Meet Exotic Unusual People, And Kill Them."

On Wednesday evening our American duckball team crowded into a gay British pub. I was standing at the bar with Paul, when a drunken man next to us, unhappy with the service, pounded the counter hard with a glass beer mug. The mug promptly shattered, widely slicing open his wrist. Both Paul and I moved as if to help and then froze like statues. An appalling amount of blood gushed onto the counter, pooling out in an impossible volume, and I suddenly remembered why I had gone into law not medicine. Fortunately, Howard, one of our duckballers, was a doctor, and he pushed through to the drunken man and did appropriate medical things as the rest of us backed off.

My diary entry for Friday, March 25: 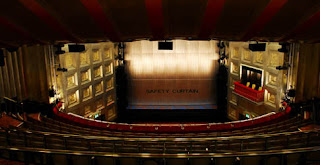 "I stopped in Leichester Square and hunted up the old Savoy Theatre. This is the theatre that Richard D'Oyly Carte built for Gilbert and Sullivan in 1882, and was home to all their subsequent operettas. I entered the theatre shortly after noon (there was no matinee that day—the current play is some dreadful farce starring Robert Morley). The box office was staffed by a very English couple, both in their late forties. 'Pardon me," I began, 'I don't want a ticket, but I'm a Gilbert and Sullivan fan of long standing, and I wonder if I might just wander through the theatre?' 'The theatre is closed,' the man replied in a cold, clipped British accent, 'and is completely dark.' 'Oh,' I said, obviously disappointed. 'Now, Mr. Smith,' the woman said suddenly, 'can't you see how much he really cares? Let me get a torch,' she advised me, 'and then follow me into the theatre.' Wow! A dream come true. It was magical wandering through the Savoy (no doubt much changed through the years) where G & S and their company had created works that enchanted me since age eleven. Seeing it by "torch" light was particularly entrancing, casting a beautiful glow over the empty stalls and stage. When we climbed up on the latter (which was surprisingly small), I nearly I teared up. 'That twit in the box office doesn't understand how people can have these small passions,' the kindly woman commented, noticing my pleasure. She apologized for not knowing much about the theatre or G & S, but I assured her as we parted that she had given me an experience I'd always treasure. To my surprise, she hugged me, and then added, "I'll remember you!' When I reached the street I did tear up. Proud of it too."

Sunday, at the airport after checking our baggage:

"The most delightful incident happened at the Gatwick airport coffee shop. We were all sitting around a very long serpentine counter (with me at the end of the nine-member duckball team), when suddenly the British man sitting with his wife next to me asked loudly, 'Might I be so bold as to query you about this game of yours?' Apparently he's overheard our banter about the previous night's loss to Nepal and become curious. CAUGHT! was the expression on all our faces, but Bob, unfazed, plunged into a discussion of the game of duckball, and, thus emboldened, we all joined in. We described our three humiliating games, but assured him that the English team was still in the running for the International Duckball trophy, so they should look for updates in the newspaper. It must have all sounded very real since we had much detail, and corroborated each other constantly with reminders about incidents we'd invented over ten days of banter. At one point Fred got up to check on something, missing much of the fun. But when the British couple asked who was our goalie, we all looked around, and then, as one, answered, 'He just walked out.' That sort of thing added verisimilitude to an otherwise bald and unconvincing narrative."