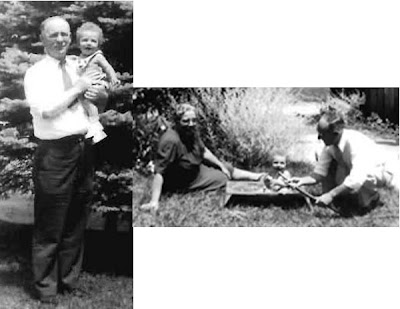 The three people in the photos (click to enlarge) are my grandparents, all interacting with me in 1944 when I was not yet one year old. The man is John Whaley, and the couple on the ground are Carrie and Roman Kunkel, my mother's parents. The missing grandmother is John's first wife. My 100th post on this blog is about her and her sad story. I'll start by showing you her high school graduation photo: 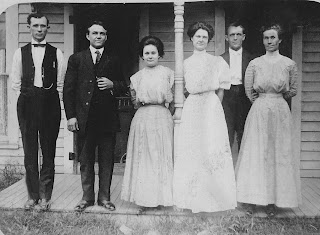 Mary Frances Ferguson (distantly related to President John Adams through a common ancestor), was born on May 29, 1885, somewhere in southern Indiana (where all of my grandparents were from), probably in Milltown, Indiana, where she's buried. On June 20, 1906, she married John Alvin Whaley.  The above photo is from their wedding day; John is on the far left, and Mary is the third from the right.  John Whaley was not a handsome man (photos of him make it clear that I inherited his large ears, including the prominent way they stick out), but he was described by his brothers as something of a rake, and quite the snappy dresser in his day. [Dad once told me that his father, when young, was twice sued in bastardy proceedings by women he'd romanced, with what outcomes I know not.] ﻿﻿

John's marriage with Mary Ferguson was apparently a happy one, and produced three boys: Wayne, Jack, and Robert (my father). ﻿
Dad, the youngest, was born on June 20, 1919.  Here is another picture of Mary with her oldest son Wayne: 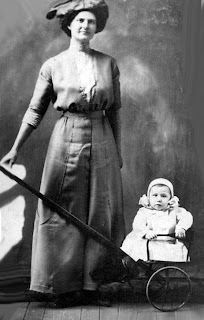 Before my father reached his third birthday, his mother  and both brothers were dead. Wayne died on December 22, 1916, Jack on August 16, 1920, and Mary on February 21, 1922.  Dad later told me he was unclear what killed them, but pneumonia was his guess, though the famous flu epidemic of the period could also be involved. In the photo below you can see how very ill Mary Whaley looks as she tightly holds on to the arm of her last remaining child, my father. 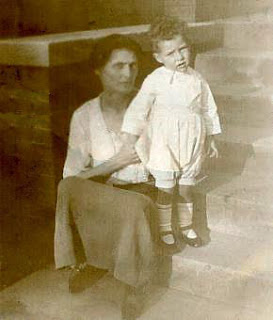 John Whaley rarely talked about his wife to anyone, not even his surviving son, but late in his life he asked Bobby (as he called Dad) if he remembered her at all. Dad said he recalled being at the feet of a lovely woman who was reaching down, fingers waving, as she picked him up. He also asked his father if her coffin wasn't displayed for days in the living room of their home, which he seemed to remember. John confirmed that was right. John also bitterly commented that if you want to know true sorrow—the kind that brings you to your knees and makes suicide seem attractive—lose your young wife and two of your children in the span of one year. The only thing that kept him going was the need to take care of his Bobby. 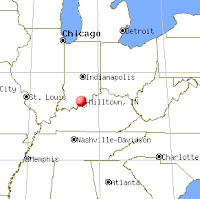 When I was ten and my sister Mary Beth eight, Dad took our family to Milltown. He showed us around the tiny place in which he was born and lived until he was a teenager and moved to Jasper, Indiana (where he met my mother). At one point we went to the Milltown cemetery to find his mother's grave. Mary Beth and I were walking ahead of the others and suddenly she stopped cold and went white. "What's wrong?" I asked her, worried. She pointed. The grave right in front of us had "Mary Whaley" carved prominently on the tombstone. Seeing her own name like that was quite a jolt.

Eventually John Whaley decided that his son needed a mother, so when Dad was nine years old John married Ruth McCarty in Milltown. Ruth (whom everyone, including John, called "Mack") taught Home Economics at the Milltown High School—who better to take care of a small boy? Dad always laughed when he remembered that she gave him his first pair of long pants, apparently a big deal early in the last century. Mack was quite a character, and some future post in this blog will tell her complicated story (I represented her in four different legal matters late in her life—she loved suing people).

But at this late date what can we know about Mary Ferguson Whaley? There are some clues. My sister Mary Beth (who was named after her) once spent a couple of years in Indiana, and explored the Whaley family. Talking to Whaleys who had known Mary, my sister says they would brighten up and smile when her name was mentioned. Apparently she was much fun to be with.

She almost had to have been a gifted storyteller with a great sense of humor. Why? Because Dad was a genius at telling wonderfully funny stories (and Mary Beth and I inherited our storytelling ability in large part from him), but John Whaley did not possess this trait. While my sister Mary Beth says he was more forthcoming with her, I never saw him make more than mild attempts at humor, never heard him tell a single story (even when prompted to do so), and never heard him talk much at all. John Whaley had real talents and there are a lot of interesting things he did in his life (his story will be told in a future post, and will include such things as his prowess with a shotgun, his love of birddogs, his golfing battles with my mother, how he had his eye shot out, and his descent into and recovery from mental illness), but he was not charming. The only time he ever volunteered a comment to me that wasn't dictated by the circumstances occurred when I was ten and he gave me this advice: "Save your money, Doug." In his defense, I should mention I didn't know him when he was at his best: he was quite old, as grandparents go. When I was born in 1943 he was 61, so by the time he and I could possibly interact in any meaningful way he was in his seventies or older. John died in 1964 just shy of his 82nd birthday, when I was a junior in college.

Anything more about Mary Ferguson Whaley's personality is lost forever. Bothered by that knowledge gap, I decided to assign her some mythical traits, just to create a connection with my unknown grandmother. The only one I've concocted so far is silly, but fun. Ferguson is a Scottish name. One of the supposed traits of the Scots is being tight with a penny. I'm generally not known for that, but I do have the annoying habit of trying to use every bit of any product, particularly food, that I've purchased. Thus I will, for example, scrape a peanut butter jar down to the last tiniest morsel, even when this is a waste of time and borders on the fanatical. Someone who once saw me doing this (I don't remember who) asked me why I worked so hard at mining the dregs, and I heard myself indignantly reply, "Didn't I pay for it all?" Without the slightest justification for believing it true, I pretend that this stinginess comes from the Mary Ferguson Whaley genes. If I catch myself going overboard when scraping orts from a jar, I mutter, "Give it up, Grandma!" That makes me laugh and I quit.