One Year of This Blog

December 19, 2010
The original Flag Counter for this blog was wildly inaccurate (see my January 12 post: "Flag Counter" for an explanation of the problem), so beginning August 20 I switched to StatCounter which has logged around 700 visitors a month since then, and a large number of foreign visitors (just this morning there were visits from Poland, India, and Mexico!). Extrapolating from that, over 8000 visits have been made to my blog.  As of Sunday, December 19, 2010, StatCounter's new flag count looks like this (click to enlarge): 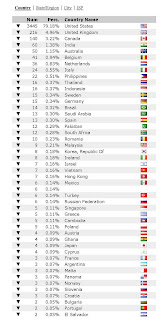 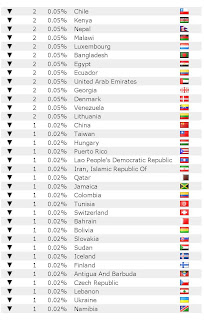 It's now been one year since I started, and who knew I could have as much fun as I've had writing this blog?
After my heart transplant I was told that following life-altering events one is required by law to begin a blog, and, being a law-abiding citizen, I did as directed. The heart transplant was the Monday before Thanksgiving in 2009, but, in the beginning, the steroids they gave me made my hands shake so hard I couldn't fill out a check, much less type a document of any length. But thereafter the doctors decreased my steroids steadily (and stopped them entirely last summer), and by December 17th I posted by first blog entry. It, and the two that followed, are uninteresting—I hadn't yet hit by stride and was unclear what I wanted the blog to be. But by December 27th, when I posted "Dog Meat" (the story of nearly being mauled by two Doberman Pinschers at a party in D.C.), I was into the rhythm of it all. I decided that my blog would not just be musings about current events or the minutia of the day, but would be little essays on a wide range of topics: stories, advice, reflections, helping people in trouble, and advocacy. Some posts are just plain fun ("Doug's Favorite Jokes," November 11, "Some Cartoons I've Saved," October 20, "The Best of My Library," August 27). In the beginning much of what I wrote was about the heart transplant and meeting the donor's family (see, for example, "My Heart Belonged to Andrew," February 17), but since then the topics have been all over the map. 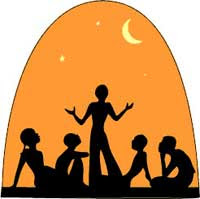 The Stories. I'm the son of two gifted storytellers, and my sister is also a storyteller, so apparently it's a family trait. Thus many of my blog entries are the stories (like "Dog Meat") that I've often dragged out to entertain friends in the past. A huge number of these are about my family. My father is the subject of many because nothing he did was dull: joining the Air Force for WWI ("No Pennies In My Pockets," July 30, "Bob and Kink Get Married," June 2), growing up ("Bob Whaley, Boy Lawyer," March 28), or practicing law in a most unconventional fashion ("Bob Whaley and the Best Evidence Rule," June 26, "Dad and the Cop Killer, July 19). But many other characters show up for their share of these tales: my fascinating mother ("Doug, Please Get My Clubs From the Trunk," August 20, "My Mother's Sense of Humor, April 4), my ex-wife Charleyne ("I Married a Hippy," April 14, "Charleyne and the Giant Cookie," September 16), and many others ("Mary Beth and the Gay Teddy Bear," September 25, "Two Stories About Tom," October 6, "Recidivist: A Criminal Who Does It Again," September 10). 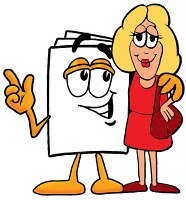 Law. While I've said quite a bit about law teaching (see "The Socratic Dialogue in Law School," January 31), most recently I've been explaining to lawyers and the courts the necessity of producing the original promissory note before mortgage foreclosure is possible, and a large number of the blog readers have come for this information (see "Update: Mortgage Foreclosure and Missing Notes," November 16). I hope it serves them well. One of my posts on this topic was entitled "The Sexy Promissory Note," (August 17th), and I was puzzled by the many foreign visitors to this site who came specifically to read this particular post. Why, I asked myself, would they care about mortgage foreclosures in the United States? Then I realized that they were misled by the word "sexy" in the title! Doubtless on learning the true identity of the sexual object, an inanimate object (albeit portrayed with an arm around a hooker, see photo which accompanied the original post) they didn't stay to read more. However, many foreign visitors have signed on to view my thoughts on the next topic:

Homosexuality. I have a great deal to say about why people are gay, how many there are, and attempts to change them (see, for example, the most Googled post: "Homosexuality: The Iceberg Theory," April 25), but I won't belabor the point here. I do like to think I've given some guidance and even hope to those, wherever in the world they may be, who are lost in the dark woods of homophobia and struggling to escape.

Atheism. Another common blog topic concerns my nonbelief (see "When Atheists Die," October 17). These posts reflect my opinion on how human beings should behave on the planet, as seen through the eyes of someone who is bothered when our most important decisions are guided by ancient misunderstandings of the world.

Fun Things. A large number of the posts are simply meant to be entertaining ("The Carolers: A Comic Christmas Song," December 7), or humorous ("Teaching English to Cats," August 6), or speculative ("Men, Women, and Pornography," December 10; "Football Advice for Coach Tressel," October 23, etc.). [Alas, I'm not above hawking some of my own works: my novels, the songs, etc.—but, not, you will notice, the things that really pay the bills: the law books. I do thank those of you who've been so kind as to buy my novel, "Imaginary Friend," or download some of the nutty songs.] Perhaps the post I'm proudest of is "Benjamin Franklin Riding Shotgun" (May 29), which expresses the simpleminded optimism I feel about this incredible world we live in and rarely appreciate.

Readers. I can't tell who's reading my blog from the statistics gathered by StatCounter, which only lists cities and dates and sometimes (but rarely) what was read; to look yourself, click on "View My Stats" in the upper left corner of each page, and then "Country/State/City/ISP" in the left column. The identities of a few of my persistent readers are obvious because of their location. My Beaumont, Texas, fan is my beloved cousin Jane Birge (about whom I will someday publish a post that will make eyes pop), and Cleveland is Susan Brown, a friend from long-ago (about whom I did publish a post, disguising Ms. Brown with a pseudonym, which drew an amused email). But most constant readers are simply strangers. Someone in Los Angles has read every word of the blog (quite a chore), but I have no idea who he/she is. There are some interesting foreign visitors as well. Take the mysterious Adelaide, Australia, reader who on October 5 found the blog through a search entitled "what caused the change gay rights," which led him/her to my post "How To Change Gay People Into Straight People" (November 8). After a long visit that first day, this reader has returned on four subsequent occasions, exploring posts that have nothing to do with the original topic of interest. I find the idea that someone in Adelaide, Australia, is reading my blog quite wonderful. What a world we have where this kind of communication is so casually possible! 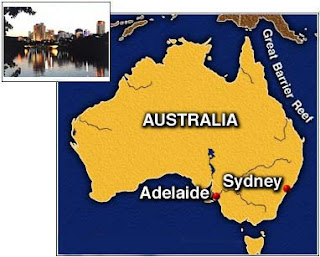 I close this anniversary post by thanking all of you who've taken time out from your busy lives to spend a moment or two in mine. If you have comments about anything I've said—good or bad—I'm always open to hearing them, and I promise to respond. Send an email to dglswhaley@aol.com.