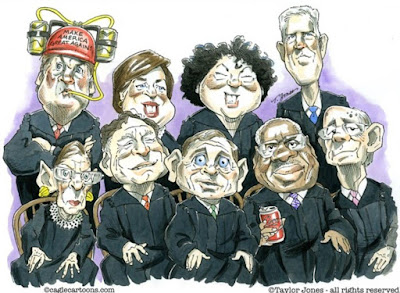 Well, by golly, it sure looks like Trump and the Republicans in Congress have succeeded in putting a man on the Supreme Court who has a past involving ugly behavior with women (especially in his early drinking days).  But Brett Michael Kavanaugh appears to have reformed and now is a model of how a man should behave when dealing with and hiring women, and good for him for that.  However, his past is still there, somewhere.  It isn’t going away.  People are going to find it and display it for the world to consider.

Almost all of us have some incident or incidents in our personal history where we did not behave in accordance with the image we have of ourselves, nor observe standards we hold ourselves to in our normal lives.  These things are incredibly painful to think about.  And we don’t think about them—or try not to.  Now imagine how horrible it would be to have debated on television with millions of people watching!  Yikes!  Poor Brett! 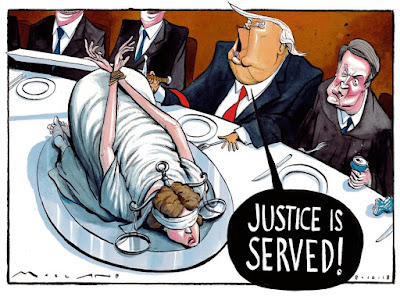 Here’s Justice Kavanaugh’s problem.  If the allegations against him are true (as many people, myself included, believe) there are lots of witnesses still around who saw or experienced this debauchery  when Brett was intoxicated and partying.  Women/girls were pawed, insulted, roughly handled, assaulted, and, in some allegations, even raped.  Now that Dr. Christine Blasey Ford has opened the door for women to come forward, we are going to hear from lots more of them.  Attorney Michael Avenatti, a legal bulldog with his jaws firmly clamped around Kavanaugh’s leg, is finding more and more of these women to speak up, tell their stories, and these tales are all going have very similar threads: drunken behavior making an otherwise fine man do indefensible things.
Avenatti is not alone.  With a saga this good, a historical event inevitably unwinding day by day, and a public fascinated by this train-wreck-in- progress, digging into Kavanaugh’s past will be the favorite sport not only of story-hungry reporters but also historians (professional or not) who want to see where the trails lead, and thus the unraveling begins.  Names, etched in history, are going to be made from this investigation.  Mark Judge, Kavanaugh’s boozehound friend, has clammed up so far, but at some point someone is going to get him to talk. 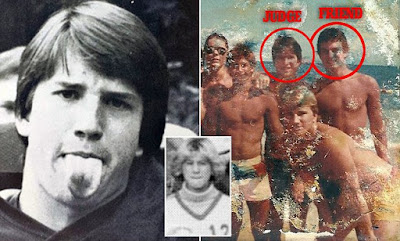 Lawsuits are highly likely to be filed against Brett Kavanaugh, and his status as an Associate Justice of the United States Supreme Court will not shield him even slightly from such troubles.  Legal nightmares will take up a lot of his time and keep him in the news while he gamely tries to concentrate of the legitimate business of the Supreme Court.  In Maryland and the other jurisdictions in which these events supposedly took place there is no statute of limitations for rape or attempted rape.  How will it look when People v. Kavanaugh is on the nightly news for months as the trials takes place? 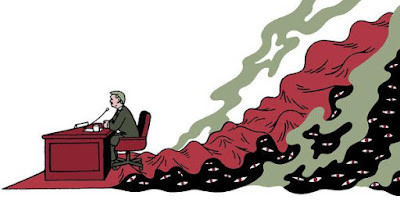 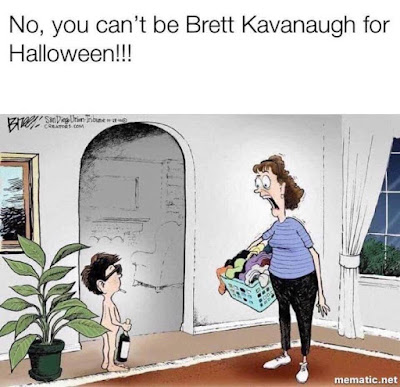 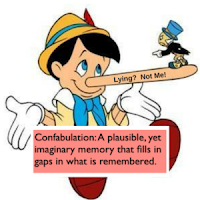 One of the Justice’s problems (a difficulty, alas, we all have) is the matter of “confabulation.”  Confabulation is the mental trick by which we all rewrite our own history, changing the details, telling the story slightly each time, building up false memories, often of events that when refigured are completely the opposite of what really occurred.  I’ve written about this before when it happened to new anchor Brian Williams, causing him to resign from his NBC Nightly News post [see Related Posts below].  Here’s how it always happens: the first time we relate a story about what occurred it's usually more or less right.  The second time the story changes slightly but we don’t notice it.  The third time it’s quite different, and so on.  You can be certain this plays a part in Kavanaugh’s reactions to the charges against him.  His versions of his conduct as a teenager (which he will believe with all his heart) will omit much that he really did.  Everyone does the same cleansing process with their memories.  I do.  You do too.  But confabulated events in our own minds are not thereby made factually true.  And when the evidence of what really happened is displayed for all to see, shocking us to our core, doom can follow swiftly.

If this happens either Kavanaugh will be forced to resign or Congress will take steps to impeach him.  There have not been many impeachments of federal officials in our national history, but the majority of those that ending in a guilty vote were of federal judges.

I may be very wrong about this case.  Kavanaugh might be totally innocent in spite of that damning high school yearbook (exhibit A in his trials), and if so there is nothing worth pursuing.  The scandal will piddle out, or at least be no more than an ugly incident in his past like that of Justice Clarence Thomas and Anita Hill from 1991 when lesser allegations of sexual misconduct were made against that jurist. 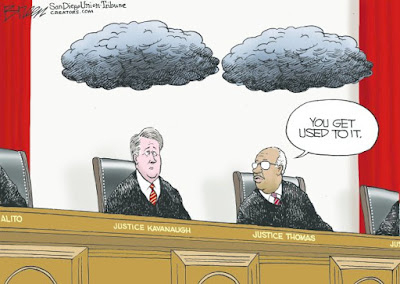 But I doubt that’s the result here.  And I suspect every night when Kavanaugh’s head touches his pillow he says a silent prayer that he won’t wake up to morning news with headlines screaming his name.  Every night.  For years. 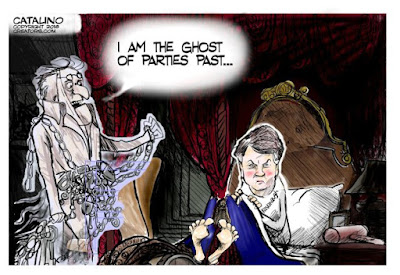 “We Are All Brian Williams: Confabulation Muddles All Our Stories,” April 20, 2015, http://douglaswhaley.blogspot.com/2015/04/we-all-are-brian-williams-confabulation.html