There are rumors that Justice Anthony Kennedy will retire this summer from the United States Supreme Court, where he has served since 1987, as soon at the current term ends in June.  That would be a catastrophe for liberals and a triumph for conservatives, a condition that would likely last for decades.  Donald Trump would certainly appoint a very conservative Justice to replace him, and all future decisions would be right-leaning in the extreme.

I’ve often blogged (see below) about how Justice Anthony Kennedy is the most important judge in the entire world because he sits on the highest court in the most important country, and on that court there are four confirmed liberals (Ruth Bader Ginsburg, Stephen Breyer, Elena Kagan, Sonia Sotomayer) and four confirmed conservatives (Chief Justice John Roberts, Clarence Thomas, Samuel Alito, and Neil Gorsuch).  Kennedy himself is the swing vote in almost all the cases where these two forces will disagree, sometimes siding with the liberals (gay marriage) and sometimes with the conservatives (Hobby Lobby can have religious views even though it is a corporation, and Citizens United, also a corporation, is a person with the first amendment right of free speech, allowing it to flood the country with money for political advertising and have a Godzilla effect on elections). 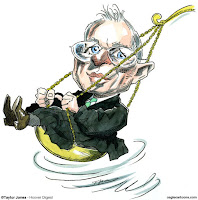 He is old (and I get to say that since I turn 75 this year and can claim to be old myself).  Old judges retire, and when Kennedy goes, so goes the nation.  Timing is important, as explained below.

Anthony McLeod Kennedy was born on July 23, 1936, making him 82 this summer.  The work on the Court is hard, important, demanding, and there must be days when he longs for calm days stretched out on a hammock, or playing with his grandchildren, or having fun with the woman he’s been married to since 1963.  If you watch an interview with him, or better yet a CNN long discussion, you’ll discover he is a soft-spoken, keenly intelligent man, with a twinkle in his eye, and a delightful sense of humor.  [For a wonderful interview with him at Harvard Law School in 2015, where, damn it, he looks younger than I do, see https://www.youtube.com/watch?v=ZHbMPnA5n0Q]

The Court’s term runs from the first of October until the end of June, and therefore early July is the traditional time when a Justice announces that he/she wants to retire, thus giving the president sufficient time to choose a successor and put this person on the Court by the start of the new term.  There have been rumors for years that Kennedy might retire, but so might two of the liberals: Ruth Bader Ginsburg (85) and Steven Breyer (80 this August).  Of course the liberals should have retired during Obama’s terms if they wanted liberals to replace them, but, alas, they didn’t.  Ruth is particularly guilty for letting that opportunity slip away (because she’s had health problems and is the older of the two), though Mitch McConnell and friends might still have held up her replacement for years rather than let Obama fill her slot with another liberal.

This is a crucial moment for the Court.  If Justice Kennedy elects to retire this summer, President Trump will nominate, and the Senate likely confirm, a Justice who will keep the Court on a completely predictable course, 5 to 4 decision after 5 to 4 decision, that advance a purely conservative result for decades to come.

But if Kennedy elects to remain on the Court for one more year at least, things are very different.  The 2018 election could well give the Democrats control of the Senate.  In that case Trump could not get approved a Justice whose views were far right, and would have to settle for nominating a moderate.  That would keep the Court politically right where it is now: balanced.

Justice Kennedy has already hired judicial clerks for the coming fall term.  That’s a sign that he’ll stay on, but in the past it has not prevented retirements, with the hired clerks typically then working for the replacement Justice.  One thing in favor of Kennedy’s retirement is that he was appointed by a Republican president (Reagan) and might want to make sure his replacement is chosen by a Republican president.  Of course that assumes he is pleased with the choices that Trump has already announced are on his judicial list, meaning someone who would be yet another Neil Gorsuch (who has consistently voted for the most conservative positions possible since Trump elevated him to the Court).  Kennedy might favor a result that leads to someone more like himself sitting in the chair he vacates.  And if Kennedy retires he gives up one of the most powerful positions on the planet and becomes a footnote in history.  It must be hard to give up power that heady.

Should one of the liberals (Ginsburg, Breyer, Kagan, Sotomayer) die or leave the Court for any reason during this Republican presidency, chances are good that a very conservative Court would be controlling results for many, many years thereafter.

So, as I said at the start, if you are a conservative things are looking good for a Supreme Court that will be very much to your liking.  If you are a liberal or favor a Court that is more balanced in its approach to the controversial cases that will come before it, then hope that Anthony Kennedy holds off his retirement for at least another year, and watch carefully the health of the liberal members sitting precariously on their side of the bench. 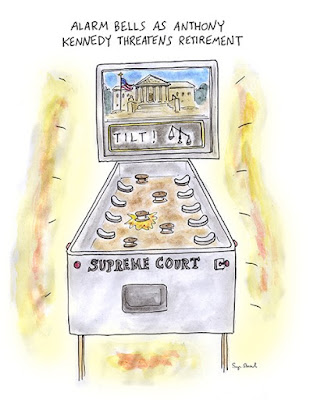