On the weekend of August 15-18, I participated in the first Great Lakes Atheist Convention in Toledo, Ohio, put on by the organization of that name, which is run by its founder Barbara Williams.  Speakers flew in from all across the country and their presentations, one after the other, were all very impressive and important to hear.  I’d suspected that I’d be uninterested in most of the talks, and I was happily wrong.  They were terrific, and I learned much.  They included Rachel Johnson explaining how atheists should view sex, J.T. Eberhard with a slide show explaining how to respond to believers in debates, Edwin Kagin (the attorney for American Atheists) describing legal battles to keep religion out of the government, horrifying personal journeys from Darrell Smith (who at one point was a member of Islam), and Bria Crutchfield (who started life as a Jehovah’s Witness), and Jerry DeWitt who has published a book (“Hope After Faith”) about his escape to atheism after a career as a devout fundamentalist minister.  Following the convention’s supper on Saturday, we were treated to a sermon from Brother Sam Singleton, Atheist Evangelist, called “Cats, Goats, and Sheep,” during which the hat was duly passed.  A dance followed that.

The convention began on Friday with a welcome from the President of the Toledo City Council, Paula Hicks Hudson, and we were pleased by this recognition from the City of Toledo.  I was the first speaker on the program, and I gave a talk on what the atheist movement can learn from the LGBT movement.  I was about ten minutes into my presentation when Barbara Williams appeared at my side and tugged at my sleeve.  “The mayor has arrived,” she whispered, and I gladly yielded the lectern to Michael Bell, Toledo’s Mayor, who also welcomed us to his city.  I then concluded my remarks, and other speakers followed.


On Sunday morning I had two other functions.  One was introducing Dennis Penaluna, an atheist from Nottingham, England, who spoke to us via Skype.  I’d met Dennis when his group had me do a book reading of my novel, “Imaginary Friend,” via Skype earlier this year (see “Related Posts below).  Dennis spoke movingly about combating false views about atheism, particularly that it led Stalin to murder millions of people (Dennis noted that Stalin was also a poet, but that wouldn’t make poets equally complicit in Stalin’s murders), and dismissing the idea that Hitler was an atheist (noting that Hitler lived and died a Catholic—he praised God in Mein Kampf— and that at the end of the war many Nazis escaped capture and fled to other countries via a pipeline organized out of the Vatican—Google that up if you don’t believe it’s true). 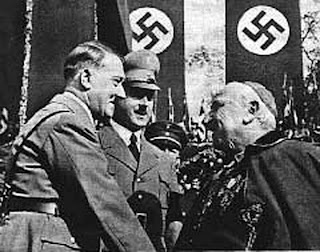 The conference ended with me interviewing Oklahoma tornado survivor Rebecca Vitsmun, who’d become instantly famous earlier this year when she, holding her one-year old son, was interviewed by CNN’s Wolf Blitzer.  He asked her if she thanked God for saving her and her baby and she replied that she was an atheist.  For the video on that see http://www.youtube.com/watch?v=rIDrmYyfWe8.  This video went viral and generated millions of hits, instantly making Rebecca a hero to the atheist community.  In my interview with her, she told her story in detail.  It included her move from New York City to Oklahoma, meeting her husband who she convinced to shift from agnostic to atheist, and learning how Oklahomans handle tornados.  She’d been through one before, but it didn’t come all that close and she’d followed their advice to “stay in your home!”  For the category F5 tornado that destroyed much of her town, Rebecca originally heeded that advice.  Her husband was not home, so she and her baby went into their bathroom, wearing helmets, covered with a mattress, and followed the weather forecasts on a computer.  As it became clear that this enormous tornado was going to hit her home directly, she suddenly decided to flee.  She grabbed her car keys, jumped in the car (holding her baby on her lap because there was no time to buckle him into his car seat), and drove out of the path of the storm to safety.  When I asked her how she decided what direction to drive she replied that she had been a math major in college and that the vectors pointed for going in the direction she went if she wanted to survive.  Some of her neighbors were killed by going the wrong direction.  Her husband returned to their home immediately after the tornado passed and found that it had been leveled and that nothing remained of the bathroom except a shredded mattress.  He despaired until Rebecca and their son arrived some minutes later.  I commented that it was math and not God who’d saved her, and she laughingly agreed. 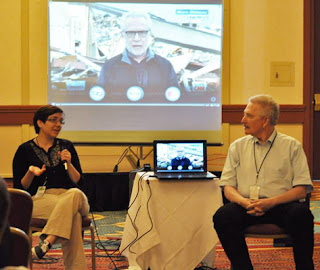 Rebecca told us that she’d begun life as a Catholic, but abandoned that faith as its flaws (and those is the argument for God) became clear to her.  When Wolf Blitzer interviewed her and directly asked her if she thanked God for making the right decisions, she didn’t hesitate to tell him she was an atheist but could understand how believers might thank their God in such a dire situation.  Blitzer is clearly embarrassed on the video (which was shown at the conference), and it’s my guess that on his deathbed he’ll still regret asking that question.  When the video made her famous it took her days to appreciate that fact.  Contacted by the media and others, Rebecca put them all off.  “I was trying to find diapers, food, a place to live,” she explained.


As a result of this experience much has happened to her.  The atheist community raised over $160,000 to help her family rebuild their life (“We’re leaving Oklahoma,” Rebecca said firmly)!  She’s become interested in and joined nontheist organizations that help survivors of disasters and respond quickly in such situations.  When someone in the audience observed that she’s a wonderful role model for the face of atheism, she beamed.  I know that’s right: she’s young, intelligent, articulate, attractive, and a great mother (bringing her son Anders with her to the convention).  Madonna and Child—not the malicious devil that the word “atheist” usually conjures up in public imagination. 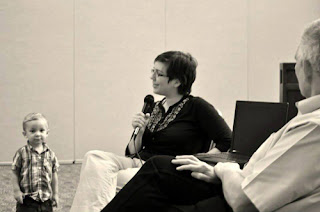 Asked if she’s heard much negative feedback from her TV interview, she says she’s paid no attention to the hatred that apparently is out there directed at her.  One of her friends told her that one blogger suggested that she needs to have her child die in a tornado before she can appreciate the power of God, but Rebecca has no time for nonsense like that.  At the end of her appearance, the audience rose to its feet applauding her, and the conference was over.


This highly successful conference is largely the work of Barbara Williams, who founded Great Lakes Atheists a little over a year ago.  Emerson once said that “every organization is the shadow of one man.”  In this case that shadow—a large one—was cast by a woman who knows what she wants and goes after it with talent, enthusiasm, and vigor.  I first met her when she came to one of my bookreadings in Mansfield, and she promptly became what she calls my “#1 fan,” tirelessly setting up bookreadings for me in many states: Ohio, Michigan, Minnesota, Kentucky, Florida, and (as mentioned above) Nottingham, England.  I asked Rebecca Vitsmun how it was that Barbara persuaded her to come to this convention when so many others had to have also asked, and she replied that in the beginning of her national fame she was too busy to talk to those who called or emailed her, and so she told them to contact her later.  When they did so Rebecca was still involved in trying to normalize her life and asked them to try yet again in the future.  Barbara Williams, Rebecca said, was the only one persistent enough to wait her out, and then pay her way to Toledo to tell her amazing story.
Speaker after speaker said similar things about Barbara, and there was an overwhelming agreement that the Great Lakes Atheist Convention was one of the best any of them had ever seen.  A number of those attending commented that they would certainly come back for next year’s convention.


But there’s a problem with that.  Although Barbara will be furious that I’m mentioning this, I know that she largely financed the convention herself and that it came up thousands of dollars short of paying for itself.  She’s not a woman of means, and she’ll be suffering as a result.  I gave her some aid, but the chances are that the Great Lakes Atheist Convention is a one-off event.  If anyone out there reading this wants to help her pay off the convention’s considerable debts, the website for the convention is http://glaconvention.com/.  Or just contact me [dglswhaley@aol.com] and I’ll be glad to introduce you to the wonderful Barbara Williams.  I’m her #1 fan.