Is It Okay Not To Use Proper English? 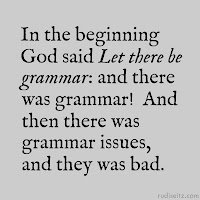 Is it okay not to use proper English?  Of course it is if you’re in a situation where you’re just clowning around with your friends, say on Facebook or Twitter.  Even the deliberate use of bad English is fine where it’s clear you’re joking and know better.  But in any communication where the other person might judge you based on how well you communicate, the misuse of the English language will get you branded as someone who doesn’t understand basic rules of communication. 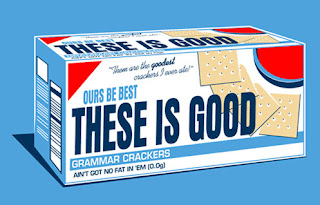 For an example, take the following Garfield comic strip panel.  Read it and tell me what’s wrong with it.

The answer is that it contains a grammatical error.  In the final panel the TV voice should have said, “But there’s one fewer cat on the planet!”  The rule is to use “fewer” for objects that can be counted (number of cats on the planet) and “less” when an exact count is not possible.  So if you want to comment on the amount of salt in a pot of soup you’d say, “We need less salt.”  But if you’re talking about the number of carrot slices floating in the soup you’d say, “We need fewer carrot slices.”


Now I’m a fan of “Garfield” and its creator Jim Davis, and don’t mean to come down too hard on a talented man and the very funny cat he’s made a daily feature of my life.  You might argue against what I’ve said above by responding like this: Garfield is just a comic strip, the cat is not supposed to an expert on the English language, most people don’t even know this silly rule, so what’s the harm?


Here’s my response:  Davis’s readers who do understand this rule of grammar (and there must be thousands of them) will have the same reaction I did: a misuse of the English language occurs, annoyance follows, and the joke is thus interrupted at the punch line.  Since Mr. Davis is very interested in making his readers laugh, interrupting their concentration so that they lose the flow of his humorous message cannot be what he intends even if huge numbers of readers won’t notice the error. 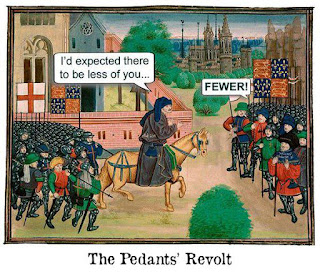 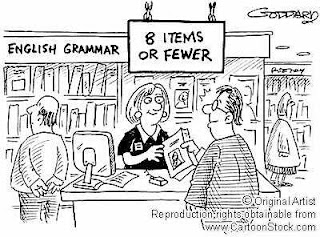 Recently a link was set up online asking for signatures to the following petition:


we petition the obama administration to:

Peacefully grant the State of Texas to withdraw from the United States of America and create its own NEW government.


The US continues to suffer economic difficulties stemming from the federal government's neglect to reform domestic and foreign spending. The citizens of the US suffer from blatant abuses of their rights such as the NDAA, the TSA, etc. Given that the state of Texas maintains a balanced budget and is the 15th largest economy in the world, it is practically feasible for Texas to withdraw from the union, and to do so would protect it's citizens' standard of living and re-secure their rights and liberties in accordance with the original ideas and beliefs of our founding fathers which are no longer being reflected by the federal government.

According to the last count I saw, 125,746 people signed this petition and it was sent to the president, who responded quickly through a spokesperson that the petition was denied.  The petition’s sponsors might have had a great many more signatures if the petition didn’t have a number of indications that its drafters misunderstood the basic rules of English.  How many problems can you spot in it?


(1) The first is that the word “grant’ needs a noun: “grant the State of Texas the right to withdraw” or  “grant the State of Texas permission to withdraw,” for example.  (2) Having properly said “State of Texas” at first, the drafters then violated a rule of consistency by not capitalizing “state” when Texas was referred to three sentences later.  (3) The petition misuses the word “practically.”  In this context it means “almost” as in “the job is practically done,” “I have memorized practically all of my lines,” etc.  When the drafters say “practically feasible” they surely didn’t mean “almost feasible.” They likely meant “practical and feasible,” but, alas, that isn’t what they said.  (4) Finally they don’t know the difference between “it’s” and “its.”  The first is a contraction of “it is” and the second is a possessive pronoun.  They said “it’s citizens” when they meant “its citizens.”
All of these errors probably scared off some possible signatories to the petition who didn’t want to add their names to a document containing such embarrassments.


Like it or not, you’ll be judged by how well you communicate, and there are rules telling your listeners something about the quality of your message just by how it’s (not “its”) phrased and presented.  You should know that “alright” isn’t a word that most dictionaries approve (it should always be spelled “all right”), that “data” is a plural word (so that “data are wrong,” not “data is wrong”), that “could care less” means you do care some (you really mean “I couldn’t care less”), and so on, and so on, and so on.
Now I’ve depressed you.  How do you learn these endless rules?  Well, you should’ve been taught them in school.  Having missed them there, it’s time to play catch-up.  What to do? 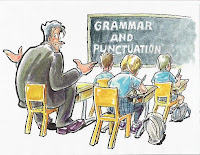 Here’s where the 21st century does things right.  Just type “how to learn the rules of grammar” into Google and begin to explore the wealth of material designed to bring you to enlightenment.  These include everything from blogs to YouTube videos, from famous books to tutors.  This won’t be easy, but who said you only get to do easy things in life?  If you want to impress people with your command of the English language, start now to get rid of bad habits that are holding you back every time you write an important email.  Certainly you should have a proofreader vet all critical correspondence that you send out into the world, and that's true for everybody. 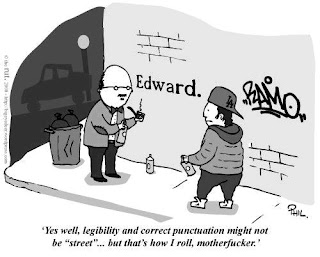