The Woman Who Runs My Life 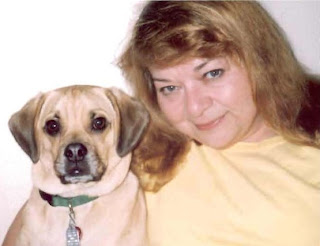 I first met Barbara in 1977, when she came into my life as a friend of my first partner, David. The two of them had met in a pottery class, and hit it off right away. She is a short, beautiful woman, with a great laugh, much good common sense, and more affection for those she loves (including her Buddy, see photo) than seems possible. Even after David and I broke up in 1981, she and I remained close friends.

In the 1982-83 school year I was a Visiting Professor at the University of California Hastings Law School in downtown San Francisco. [Hmm. Gay single man in San Francisco? Good times that year—another post, perhaps.] During my absence, my home in Columbus was rented out to another professor visiting at OSU and his family. They took fairly good care of it, but nonetheless when I returned, I was depressed thinking how much there was to do (carpets to be cleaned, things to be repaired, walls to be painted, etc.), and how little I wanted to do it, particularly given all the professional and other things that had piled up during my western adventures.

Shortly thereafter Barb asked if we could go to lunch, and once seated she launched into her pitch. As I well knew, the year before she had quit her job of 14 years at a printing company when the sexual harassment grew too much for her, and since then had been on unemployment. Much embarrassed, she asked if she could borrow $500, explaining her detailed plan as to how she would repay it. I agreed, of course, but told her that instead of monetary repayment, she could work it off by putting my house in order for an hourly rate. She jumped at the task.

Barbara was her usual efficient self, and dived into making things right with great enthusiasm and much originality. As I have mentioned in prior posts, I have no visual sense, and thus no taste (one of these days they’re going to take away my Queer Card). Left to my own shopping decisions, I always come home with the equivalent of Charlie Brown’s Xmas tree, proudly showing the miserable thing to my friends, only to have them shade their eyes and shake their heads sadly. Barb, on the other hand, has wonderful taste, and doesn’t hesitate to express it (“This must go,” “This must be replaced,” or “Oh, Douglas, how could you do this?”). She went through the $500 fast, and, with much more obviously still to be done, I wrote out a check for $750 and handed it to her. “You don’t understand,” she told me, taking it reluctantly, but knowing what I said was true, “this would never end.” “That’s my plan!” I said with pleasure. She looked at the check, confused. After a bit she said, “Maybe I’m the one who doesn’t understand.”

And that’s how Barbara came to be a fulltime employee of mine. From 1983 until this very day she has been in charge of the details of my existence. She pays the bills, has the taxes done, buys a new car for me whenever I need one (she loves cars and motorcycles—she’s the former biker chick mentioned in “My Inadvertent Tattoo” of March 6th of this year). She picked out most of the furniture I own and helped me select the condo I moved to four years ago. The two of us formed a corporation named “Commercial Law Lectures, Inc.,” and for over twenty five years she would set up lectures for me to give all across the United States advising bankers on “The Law of Checking Accounts.” In these ventures she would do all the work ahead of time: get the hotel, print up the materials I provided, send out the advertisements, sign up the attendees, make sure there were coffee and pastries, plus zillions of other things, and then I would show up, give the six hour lecture, and we’d split the profits. We did this over 260 times until my failing heart brought things to a halt two years ago. The corporation is now defunct (or at least I think it is—she’s very sentimental about winding it up, and gets teary-eyed when contemplating the task—I’m a little afraid to ask).

Barbara was born in Belgium of Polish parents who, as teenagers, met in Nazi Germany after being snatched from their Polish villages, and forced into ugly work. They had three daughters, Barbara being the middle child, born on the way to Youngstown, Ohio, where they settled, and where Barbara, age 3, had to learn English. These days she is as American as apple pie, and remembers little of Polish, except some choice curses and (a favorite of mine) a drinking toast which translated is “Goodnight, brains!”

There are more Barbara stories than I could ever relate in this blog, though some will come up naturally. Of the ones I don’t tell, some I dare not tell or she’d rip out my new heart. Alas, these are also balanced against stories she’d better not tell about me, and which also will remain blog-free. I cannot stop myself, however, from relating this one:

In her forties, Barbara was a Roseanne Barr (then at the height of her TV popularity) lookalike, and this led to no end of fun. Particularly in airports and restaurants were people doing double-takes and whispering with gestures in her direction. She loved it. One particular evening in the Orlando airport our flight was delayed and people became restless and bolder. When they started gathering, mob-like, I huffingly approached the crowd and in an insincere voice informed them “This woman is not Roseanne Barr. Please leave us in peace.” That, of course, just stoked their curiosity, and the next thing I knew Barb was signing autographs and telling stories from the set. I sat off to the side, my reaction alternating between horror and humor.

When the heart transplant came along, Barbara took charge of me completely. Since the doctors said I couldn’t keep my parakeets, she generously took them home with her. For the first two weeks that I was home, she mothered me up one side and down the other, while I sometimes bathed in it and sometimes protested that I needed more space. She was everywhere: making all the meals, changing dressings, chatting with the nurse about this and that, driving me everywhere (I was buckled into the back seat to avoid the dreaded airbags), carrying all things heavier than ten pounds, helping me figure out how to shower without opening up my chest, and many more tasks kept her busy. And she was pleased to do it.

If that woman loves you, you are indeed a lucky human being. If she were ever to quit on me, what in the world would I do? Cry helplessly, no doubt as I faced the terror of figuring out how to run my life myself. (Shudder) Many a friend has told me they need a Barbara of their own. Good luck with that. They certainly can’t have mine.