Opening in Another Play: The Pulitzer Prize Winning “Proof”


Last night we opened in “Proof” for a three week run at Little Theater Off Broadway in Grove City, Ohio (a suburb on the south side of Columbus). It's a drama with some very funny parts and involves a woman's search for identity in the shadow of her brilliant but mad father, a titan in the world of mathematics.  Her problem is that she had to care for him during much of his later life, slowing her own pursuit of mathematics.  After his death she produces a brilliant new mathematical proof that amazes everyone who sees it.  She explains that she wrote it, but even those close to her believe it is really the work of her father and she is either (a) lying or (b), like him, crazy.  The terrific play by David Auburn not only won the Pulitzer Prize for Drama in in 2001, but also the Tony Award that same year.

There are four characters: Catherine, the young woman in question, her sister Clare, a young mathematician named Harold Dobbs (who is romantically involved with Catherine), and the father, Robert.  The very talented young actors playing the younger roles: Megan Freeman has the lead as Catherine, Katie Wenzel is Clare, and John Sorenson (who I was pleased to act with in the Albee drama “Seascape” in 2014) is Harold.

I play the father, and it’s a great part, though the smallest of the four.  He is in three scenes and appears in very different lights in each: as a happy healthy man, as someone who is clearly crazy, and as a ghost!  All these scenes are interesting to play, and the mad scene is frankly disturbing.  Much of the time there is a light tone, and even some major laughs, but there are also major profanities (Robert uses the word “fuck” like a sailor) and two arguments, one almost violent.  Challenging work for an actor.  It’s a role I've longed to play for years.

Our director is the wonderful Kathy Hyland, with whom I have worked often in the past.  She directed me in my first show when I retired from teaching and went back to doing theater: “George Washington Slept Here”(2005), then I directed her “The Curious Savage” (2008), and subsequently she was the stage manager for two shows I directed, “Who’s Afraid of Virginia Woolf?” (2009) and “Art” (2013).  Our stage manager is the terrific Lauren Wong.

We play for three weekend, including Thursdays and three Sunday matinees.  Contact information is below.  Come see us! 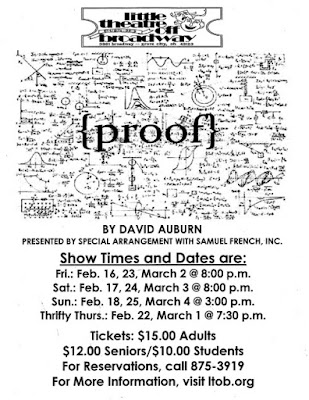