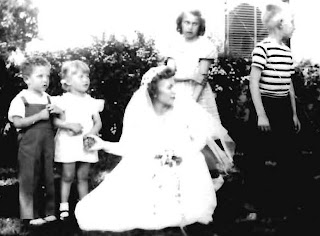 My mother was one of nine children (eight girls, one boy) from a German-American Catholic family in southern Indiana (the "Kunkels"), and as a consequence I have 41 first cousins on my mother's side, and none at all hanging from the limbs of my father's (Lutheran) family tree.  I was number seven of these cousins on the list (starting from the age of birth), and the oldest is Judy Birge (now Judy Calley).  Because we were six years apart in age, and also because I was from an Air Force family and not around a lot, we have never in our lives had any significant contact with one another, and certainly not a one-on-one experience.  The photo above, at the wedding of our aunt Catty, is the only one I could find in which Judy (standing in the middle next to her brother Jerry) and I (far left, with Judy's sister Jane) appear.  Unfortunately we really don't know each other.


Until last week that is.


I've been teaching a course in Commercial Law at Ohio State and last week was spring break.  For that break I decided to visit my longtime friends Wayne Pawlowski and Ted Heath, who have a wonderful home in Wilton Manors, Florida (I visited them last year in January, and we had a great time as we always do).  Since Judy lives in Florida within driving distance of Wilton Manors, I asked her if she would like to get together, and, more specifically, if she'd like to play bridge with me last Wednesday.  My one recent contact with Judy arose out of an email she'd sent me about five years ago telling me that I was the only member of our large family that would appreciate the fact that she'd made "Life Master" in the rankings of the American Contract Bridge League.  I was thrilled for her (and am still short of the number of points needed to be a Life Master myself), and this led to various emails about bridge.  Because Judy runs her own bridge center in the Florida town where she lives, it was with some trepidation that I asked her to play with me—she's obviously a much better player than I am.  Happily, she agreed, and we arranged to meet on Wednesday at a Wilton Manors bridge center for an afternoon game.


Wayne duly took me to the bridge center that day and Judy and I promptly recognized each other, at which point I introduced her to Wayne (his partner Ted was out of town that day).  Wayne left and Judy and I sat down and reached agreement on the bridge conventions we'd be playing.  I haven't been nervous at the bridge table in decades, but I confess that I felt some slight trepidations sitting across from my very attractive cousin.  What if I messed up badly?


Instead of that, we did quite well.  Our bidding and play was good, and almost every pair we met were fighting with each other as we sat down (always a good thing in bridge opponents).  In the end we came in third overall, an improbable result for two people playing together for the first time.  We agreed it was our superior Kunkel blood line that led to this minor triumph! (And Judy informed me that the number of Kunkel first cousins is a mere 37, not 41, as above.)

Judy drove me back to Wayne and Ted's house, and on the way I warned her what was coming:  a beautiful home suffering from a flamingo infestation.


Years ago Wayne and Ted had had a beach house in Rehoboth Beach, Delaware, and while there had begun collecting flamingo memorabilia.  What started innocently (flamingo shower curtains, flamingo lamps, etc.) soon got out of hand as friends gave them flamingo-related gifts (flamingo wine holders, flamingo paintings, flamingo playing cards—the list goes on and on).  When they moved to Florida and bought a house the flamingo mania increased to the point where they finally forbade their friends to give them any more flamingos, but it was far too late.  Today their house, now aptly named "Flamingo Crossing," is awash with flamingos on every surface, in every room, on almost every object including plates, glasses, towels, bed sheets, pillows, and so on.  This sounds artistically bad, but, much like Las Vegas where if something is overdone enough it achieves an art form all its own, somehow Flamingo Crossing works admirably.  Moreover the house itself has been remodeled so that it's stunning.  Wayne was a varsity swimmer at the University of Maryland where we met (he was 18 and I was 21—47 years ago, yikes!), so the property boasts a 72-foot long swimming pool which allows Wayne to swim laps every day (32 of them—half a mile).  Flamingos aside, the house is a wonder: sunny, bright, spacious, attractive, and comfortable. 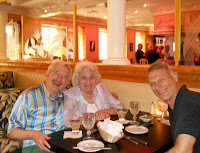 I told Judy about this, and by this time we were having a splendid time together.  She indicated that she knew Wilton Manors was a gay haven (60% of the town's population is gay, the third highest rate in the national census), and that she was fine with gay people.  Entering the door at Flamingo Crossing, she was amazed by the flamingo count, and, after a tour of the house, we three soon settled into comfortable chairs by the pool, martinis in hand.  This led to a happy hour of much laughter and great stories before we went out to a fine dining restaurant for supper.  Over that meal Wayne was cajoled by me into telling the incredible story of his first date with Ted (which occurred in D.C. in the middle of the great blizzard of 1983—indeed, their whole romance has been extraordinary, furnishing the basis for the one in my yet unfinished novel "Corbin Milk" and the blog post "The Thunderbolt").  In turn Judy told me that when she was age eight and I was just turning two, she and her mother had visited the Whaley family in Jackson, Mississippi, in 1945 just when my sister Mary Beth was being born, during which event she's helped babysit me.

Back at the house Wayne decided to bring out a flamingo-related risqué item that, before going to meet Judy earlier that day, I'd insisted he hide.  It is an-over-the-top kind of thing, but Judy thought it very funny.  This led to a hysterical photo that—alas—can't be reprinted in a blog where readers with delicate sensibilities might be offended.  [But if you're made of sterner stuff, reader, send me a request at dglswhaley@aol.com and I'll zip you back a copy of the ribald photo.]


In the end, as we said goodbye, Judy and I hugged each other and agreed it had been a magical day—one to be remembered and treasured.  I told her that I'm thinking about snowbirding in Florida in coming winters, so my guess is that my long lost cousin and I will play lots of bridge and drink many more martinis together in years yet unlived.