April 29, 2011
﻿﻿
On Thursday, May 19th, Columbus Civic Theater's "Hamlet" will premiere at 8 p.m., and then play that Friday and Saturday, with the same schedule for three more weeks. I have the plum part of King Claudius, for which I've grown a beard (more salt, alas, than pepper). Claudius is the evil uncle who's killed Hamlet's father, then married the father's wife, stolen the throne, and has murky plans for Hamlet's continued health. All that has happened before the curtain rises.

Playing Shakespeare is an both an actor's delight and terror.

Delight: the words, the thoughts, the motivations are so beautiful and complicated, that nothing in literature surpasses them. I've done three Shakespeare plays in the past (Brutus in "Julius Caesar" when in high school, Leonato in "Much Ado About Nothing," and the title role in "King Lear" (the latter two here in Columbus), and each time I'm amazed by one phenomenon. From the start of rehearsals to the final performance I discover something new in the text that I hadn't seen before. So the trick is to study and study what Billy Shakespeare wrote, and get in as deep as you can.

Terror: learning the complicated lines and then putting it all on the stage in a way that makes it look natural and easy, so that the audience has no trouble following what you're saying and what's happening in the unfolding plot. Memorizing is a transfer of text from the reading ability of the left-brain to the automatic repetition skills of the right brain (much like singing a song).  King Claudius is a flowery speaker, who loves adjectives, particularly in pairs. Think how much fun it is to memorize this little gem in which, early in the show, he chides Hamlet for brooding too much on his late father's death (eight adjectives):

King:.
'Tis sweet and commendable in your nature, Hamlet,
To give these mourning duties to your father;
But, you must know, your father lost a father;
That father lost, lost his; and the survivor bound,
In filial obligation, for some term
To do obsequious sorrow: but to persever
In obstinate condolement is a course
Of impious stubbornness; 'tis unmanly grief.

What makes this production especially appealing are the very talented people involved: Richard Albert, our wonderful director, the large cast, stage manager, costumer, and two coaches helping with dramaturgy and acting tips—all of them good fun to be around. Our Hamlet, Ben Gorman, is terrific, and our scenes together are filled with menacing venom as the two men square off for their final encounter (which, as you may know, does not end well). In the famous fight scene at the end of the play, Hamlet leaves the duel to come after his uncle. Below are some photos of the fight rehearsal where the king gets his. In the first one, Rachel Mock, our fight coordinator, shows me how she wants me to deal with Hamlet's attack. 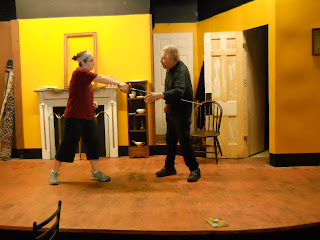 And this is our first practice at it. 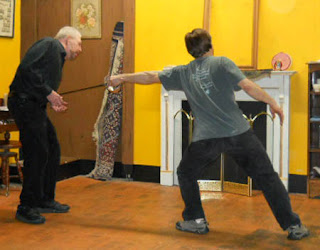 Dying convincingly is harder than it looks, and I confess to being worried (as an actor and, for the theater's sake, a lawyer) about those foils slashing around on a full stage. However, it's all being done with great care and safety, so the control freak in me is happy enough. I must say I love playing villains—they're complicated and fun.

The Columbus Civic Theater is located at 3837 Indianola Avenue, Columbus, OH 43214; phone (614) 447-7529 for reservations. You can order online at http://www.columbuscivic.org/about.html. Tickets are $20 ($17.50 for students or seniors). The theater itself is very interesting. Richard Albert, the founder of CCT, bought an abandoned filling station (yes, filling station—it still has that shape), converted into an intimate theater, and bought plush and comfortable seats from a Disney World facility in Florida so that the audience sits in luxury, each of the 49 seats having its own cup-holder! He and Ben Gorman pared the four-hour script Shakespeare wrote down to bare bones, and Richard is directing it to move at a very fast clip.

So, theatergoers, if you're interested, come see us if you can. And if you wait around afterwards while I change out of my costume, I'll come out and we'll talk about the show. 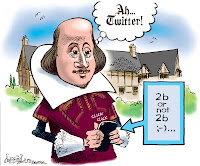