March 24, 2011
.
When I first received my heart transplant in November of 2009, I had no idea who the donor was. It's important that the mind/body connection be favorable to the new heart since rejection is a major issue with all transplants. One doctor told me some of his patients were afraid of their new hearts, and that's a bad. I developed a new mantra then that went "I don't know whose heart it was, but it's my heart now." The heart itself was wonderful: strong steady beat, constantly in the 90s (which is just what the doctors wanted).

﻿﻿﻿
Then, through a process already described in this blog (see "My Heart Belonged to Andrew," February 27, 2010), I learned that my 27 year-old heart was that of a man named Andrew.  I met his mother and step-father, and we've since become friends—indeed, they just came to see me playing the part of furniture dealer Gregory Solomon in a local production of Arthur Miller's play "The Price" (see "I Am an 89 Year-Old Russian Jew," January 31, 2011). Now that I had a name for the heart donor I could think of my heart as Andrew's. That was very useful because I could pass all my actions through this kind of thought: would Andrew want me subjecting his heart to a greasy cheeseburger? It was sort of like having Jiminy Cricket on your shoulder, telling you smart things to do.

I've explained in prior posts that the doctors have been routinely performing biopsies on my heart in which they run a tube through a vein into the heart (via my neck), and take four little snips of the heart, which are then tested for rejection. The scale runs from zero rejection—excellent—up to the number four—very bad. Originally after the transplant I was having a biopsy every week, but then I went to every two weeks, and for most of last year it was once a month. I've had around twenty of these and while there was one "2" in there and a couple of "1A"s, all the others have been zeros.

This past November was the one year anniversary of the transplant, and it called for major tests of all sorts to see how things were going, including a biopsy (zero). One of the tests involved flooding my circulatory system with dye to check for blockage, and a minor amount was found in two arteries. The doctor assured me that this could be handled with a change in medication, so she took down some of the rejection drugs when this new treatment started. I was told I would now be on a once-every-three-months biopsy schedule, so my next would be in February. Actually, that bothered me. They're changing my medication in a significant way, but not testing how it's going for three months? That didn't sound right, but I'm in law, not medicine, and I do what the doctors tell me. 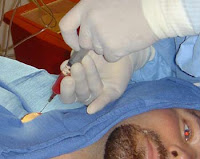 The February biopsy was a 3! Yikes! With no symptoms of any kind (and, indeed, still doing my hard workout of 30 pushups, 30 sit-ups, 30 minutes on the exercise bike, and 45 minutes lifting weights every other day), I was put back in the hospital for two days for observation. A seeming completely healthy man trapped in a hospital when he has a deadline for writing one of his casebooks used to teach law nationwide is not a pretty sight. My doctor told me she shouldn't have lowered the rejection medication so much, and immediately she started me back on bigger doses, huge amounts of steroids (causing pimples, cramped hands, inability to sleep, weight loss, and more), and other new medications. I'm currently taking around 70 pills a day. A new biopsy was scheduled two weeks after the latest, and while it showed my rejection level was down to a 2, and therefore headed in the right direction, there was a complication.

My original heart disease, first manifested in 1999, was atrial fibrillation ("A-fib"), meaning that the upper chamber of the heart begins beating too fast (see "1999-2000: A Dramatic Story," December 15, 2010). During the March biopsy, my heart went into A-fib (not a great amount, only 130 beats a minute), causing the doctor to have to settle for taking only two snips. Andrew's heart has never liked biopsies (and that is usual for all patients), jumping around when so insulted, but now my heart was beating irregularly, and the only way to get it back into normal rhythm was to put me out (fortunately a tube in my neck made that easy), hit me with the paddles ("CLEAR!"), and then wake me back up. It's an interesting experience, which I've been through before. The amazing part is that from my point of view I don't seem to pass out. I can feel the drug starting to work but immediately the doctor says something, to which I respond, "When are you going to put me out?" The answer is always that it has already happened, and, I notice, my heart is beating normally. "Wow! I was out and it's over?" The doctor smiled and added, "You should have seen how high you jumped."
﻿﻿

There have been some irregular heartbeats since then, but nothing that concerns the doctors much, and I confess I'm afraid that the heart is going to go into A-fib during the biopsy that's scheduled for early April. On the other hand the doctors themselves don't seem much worried about anything, so we'll see what happens. I remain in great health otherwise and am still working out. Yet, all this has apparently bothered me more than I thought, though I've often come close to death in my life and don't dwell on that. I had a dream while taking a nap last Saturday prior to the last performance of the play, and in the dream my heart suddenly malfunctioned and I started falling to the floor. Interestingly (because it says something screwy about my priorities) the only thought I had as I fell was "I wonder who'll they'll get to play Solomon tonight?" It was a good dream to wake from, and I gave one hell of good final performance.

But I'd reached a point where I decided I had to stop thinking of my heart as Andrew's. It's my heart now, and I must fully embrace it and treasure it and care for it. As time passes, my body is replacing all of its cells with ones I've generated, though I'm fully aware that if I ever in my life stop taking rejection medication, the heart would fail. However, I also want to honor Andrew and his tragic sacrifice, and it would be wrong to strip his heart of his name. So I created a compromise.