My Mother’s Sense of Humor 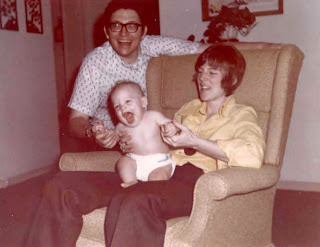 Each of my parents had a wonderful sense of humor [see “My Competitive Parents,” January 20’s post], and it was great fun being around them (absent some misbehavior on my part, which, of course, rarely occurred). But Mom’s was something special. She was wildly inventive, could do physical shtick on a Carol Burnett level, and was fast with a good quip as well.

One example of the latter: when both my sister and I were adults living in Bermuda [see “My Year in Bermuda” from February 9], one night my parents came home from an event at the Officer’s Club on the Air Force Base where we lived, and both had had a number of drinks. My mother was annoyed at Dad because he had come close to behavior she disapproved of. This behavior arose if he was talking to someone at a party and that person was rude enough to suddenly say, “You don’t remember who I am!” Dad, to punish such incivility, true or not, would sometimes say in reply, “You look like the sort of person I might forget.” That particular night Dad and Mom had been talking to the base weather officer’s wife, and she made the offending assertion. Dad opened his mouth to give his standard answer, but Mom surreptitiously kicked him in the shin as she simultaneously replied, “How can you say that, Mrs. Such-and-Such, when we’ve known you and your husband, Captain Such-and-Such for a long time?” At home she berated Dad over the incident, telling him that it would lead to people calling him ugly names like “son-of-a-bitch.” Breezily Dad replied, with a wave of his hand, “Why should I care if people call me a ‘son-of-a-bitch?’ I long ago settled that question when I asked myself if I’m a son-of-a-bitch—so their opinion on the matter doesn’t faze me.” Mom didn’t miss a beat. “How did that come out?” she queried.

Above is a 1973 photo that Dad took of my wife Charleyne and me, with baby Clayton on Charleyne’s lap. All three of us are laughing hard at something my mother is doing. What it was I no longer remember, but we all (and, note, especially the baby) are hysterical. Some years later when he was around age four, Clayton and I were visiting my parents for Christmas, and since his birthday falls on December 29, my parents had a celebration in his honor. Mom had her own birthday rituals which Clayton now experienced for the first time. Of course there were the usual cards, gifts, and wishing before blowing out the candles on the cake, but then came a major event she insisted upon: the birthday boy/girl getting down on hands and knees and rapidly passing between the spread legs of the other celebrants, who gave him/her a playful paddle to the backside. Clayton was game, and we all laughed at how quickly and enthusiastically he scampered through the gauntlet. But then Mom got down on the floor beside Clayton told him, “Turn about is fair play. Know what that means?” He replied that he didn’t. “Okay,” she explained, “Spread your legs wide as you can.” He did so and she got on her hands and knees in front of him. “Now,” she explained, as if it were the most natural thing in the world, “you get to paddle me as I run under your legs!” She proceeded to try to do this, which was, given the relative sizes of the two participants, impossible, but her clownish attempts had Clayton in stitches. Watching this I had a flashback to a memory I didn’t know I possessed: her trying the same impossible stunt with me when I was very little, and remembering how very funny I thought it was then.

But my mother’s best efforts were inspired by April Fools’ Day. I particularly remember a three year series of these pranks. The first year, 1965, I was finishing up my senior year in college when I received a phone call from Mom, her voice trembling (what a good actor she was!). “Doug,” she said, “a letter has just arrived from the federal government demanding you report in two weeks to the naval base at Bethesda, Maryland, for reinstatement to active duty!” Since this was the height of the Vietnam war, and since I had been very lax in attending the Reserve meetings that were routinely required for a two year period following active duty, a sense of horror engulfed me. She misled me with this tale for some minutes as we discussed my options, until we could think of nothing more to say and hung up. She let me stew for another five minutes before phoning again with the usual two word taunt: “April Fool!”

The next year I somehow caught her off-guard and had my revenge. I was by now in law school in Austin, Texas, while my parents were in San Antonio, some 80 miles away. About five in the afternoon I phoned her, and by mere chance both parents picked up separate extensions at once. After the briefest exchange of pleasantries, I said, “I’m conflicted about whether to tell you this or not, since I promised I wouldn’t, but your sister Gerry and her family just left here on their way to visit you.” “WHAT?” Mom exclaimed. This particular sister lived in Indiana and was not known to be currently travelling. “Yes,” I replied, “they’re on vacation and wanted to surprise you—they certainly surprised me! But they were very insistent that I not tell you. I wrestled with it for awhile after they drove off, and then decided I owed it to you to call.” “Oh, thank you, Doug,” my mother said with real gratitude in her voice. “This place is a mess!” After we put down the phones, I waited about fifteen minutes before calling back with the joyful news that it was a hoax. Dad later told me that while they were both taking my first call he could see Mom across the room, and as she heard the unexpected warning she began dusting things with her shirt sleeve, phone still in hand.

The next year was 1967, and April Fools’ Day fell on a Saturday. I was home for the weekend in San Antonio at my parents’ house, and was happily sleeping in late, when Mom suddenly shook my shoulder violently. “DOUG! DOUG!” she screamed, “FIRE! FIRE! GET UP! WE HAVE TO GET OUT OF THE HOUSE!” Ever the actor, she was very convincing, and I, of course, was still half-asleep. Groggily, but with growing alarm, I let her lead me to the front door. When I stepped outside she quickly shut the door behind me. It was a beautiful day, with neighbors mowing their lawns and waving at one another, and I was standing there wearing only underpants. The door, predictably, was locked. I could hear her laughing uproariously on the other side—she had pulled it off beautifully. When she could catch her breath, she yelled, “April Fool!” Meantime, I was pounding on the door, very unhappy, demanding to be let in. She finally relented, but on turning the lock she quickly ran to her bedroom, slamming and locking that door until I calmed down and, grudgingly, could see the humor in it all. Like all practical jokes it didn’t seem particularly funny at the time.